Girl Power: The Ladies are Taking over Singapore Art Week 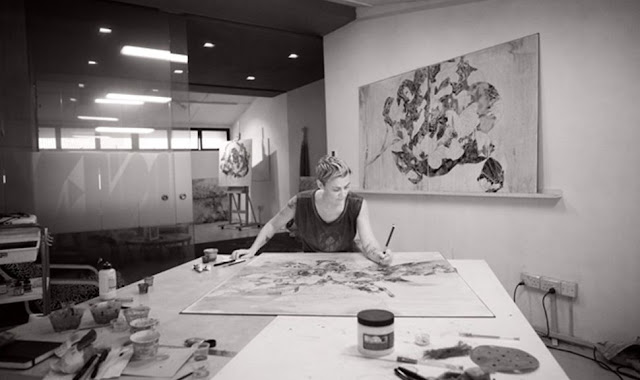 Jane Lee at STPI, Donna Ong at FOST Gallery, Melissa Tan at Richard Koh, and Belinda Fox at Chan Hampe Galleries; some of the most interesting solo exhibitions during the upcoming Singapore Art Week will be helmed by female artists.

Possibly the most awaited show is that of established painter Jane Lee, who had an incredibly busy year in 2015 and has consolidated her place as one of the leading Singaporean artists. Several of her pieces achieved well above their estimate at auctions, her work was included in the Art Paris Art Fair and at Art Basel Hong Kong, as well as a collateral exhibition during the Venice Biennale at the Palazzo Grimani.

"Freely, Freely" will showcase the outcome of her residency at STPI and illustrates an interesting departure from her usually thick-paste abstract works, as she worked with print and paper around the themes of entrapment and freedom.

“I wanted to work around a good narrative. I thought about paper: paper — tree, tree — birds. I’m exploring the ideas of freedom and imprisonment using images of birds,” Lee told Blouin Artinfo earlier this year.

She has stretched the possibilities of the medium by combining unconventional materials to produce dynamic installations that will fully immerse the viewer.

Lee says she is particularly proud of a video animation entitled The Birds, a film projection on a film object. “The object itself is made up of film material that really excites me as this is the first time I am exploring this form of art,” she says, adding she’ll now probably continue to experiment with new media like print, sound, and animations with a storyline and images in the near future.

Meanwhile, Donna Ong’s solo show at FOST Gallery, My Forest Has No Name, will explore humankind's fascination with the tropical forest through time using a series of artworks that merge antique prints and text with original artwork.

Ong also had a very busy 2015, starting her year well by winning the installation category of the Prudential Eye Awards for Contemporary Asian Art, and then participating in the group show After Utopia at the Singapore Art Museum and then completing a residency in Germany.

At Chan Hampe, Singapore-based Australian artist Belinda Fox will present Balancing the World, inspired by her time in Singapore and travels to Vietnam and Myanmar. The series of paintings looks at the loss of traditions and the exploitation of nature in the name of progress, drawing viewers in through the works’ innocuous beauty that reveal their message only upon closer inspection. The show will include a number of ceramic sculptures created in collaboration with Singaporean performance artist and ceramist Jason Lim.

Meanwhile, Richard Koh Fine Art is presenting Melissa Tan’s solo exhibition titled Arc of Uncertainties at Artspace @ Helutrans, an exhibition that will build on her previous show with a visual exploration inspired by the formations of lost asteroids and minor planets through her delicately cut pieces of watercolors on paper with traces of iron oxide.

Tan layers the cut sheets between laser-cut powder-coated stainless steel structures with the juxtaposition of reflective metal surface and paper introducing a complexity that enhances the layering and illusion of greater density. Tan’s previous works had been inspired by her studies of crystal formations.