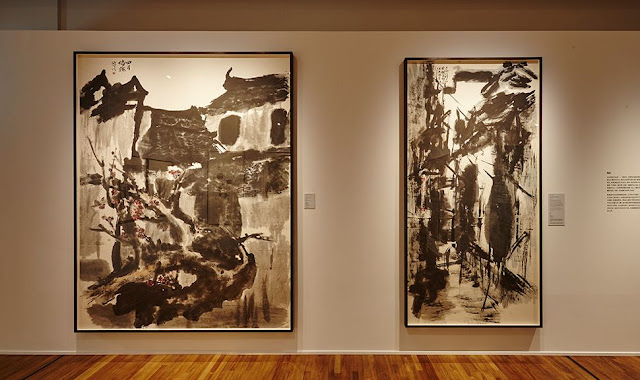 During his lifetime, Singaporean artist Chua Ek Kay enjoyed a level of critical acclaim that few other local artists have experienced, and yet a his work had never been given a full museum survey. The ‘Chua Ek Kay: After the Rain’ exhibition, at the recently opened National Gallery Singapore, goes some way to remedying this by bringing together over 60 pieces by the artist, who passed away in 2008.

“We wanted to showcase big themes that Ek Kay would often go in to. One of them was nature and lotuses. He often used lotus ponds as a way to reflect on the cycle of life, because ponds are not just about life and beautiful blooms but about decaying too, and death,” explains curator Low Sze Wee.

Born in 1947, Chua started learning calligraphy with his father when he was seven years old and later developed a love for classical Chinese poetry under the guidance of well know poet and calligrapher Pan Shou. He studied ink painting with artist Fan Chang Tien in the 1970s‑80s, and the positive response to his first exhibition in 1988 gave him the confidence to dedicate himself to this passion. He won the UOB Painting of the Year Competition in 1991 with My Haunt (on display) and was awarded in 1999 the Cultural Medallion, Singapore’s highest national honor for the arts .

Through overseas studies and art residencies, Chua started to develop an interest in Western art in the late 1980s, favoring works by Willem de Kooning and Anselm Kiefer.

Similarly to Wu Guangzhou, the Chinese ink master whose work is also featured in a retrospective at the museum, Chua was interested in transforming traditional Chinese landscape painting. However, as he couldn’t easily observe Chinese landscape firsthand, he turned his attention to a landscape he saw everyday: Singapore’s street scenes.

Chua was saddened by the rapid urban redevelopment and disappearance of a more gentle way of life, and his works aimed to capture a “sense of history” passing by.

“Chua’s works are quite melancholic and I believe give a sense of alienation,” Low said noting his landscapes are often devoid of humans.