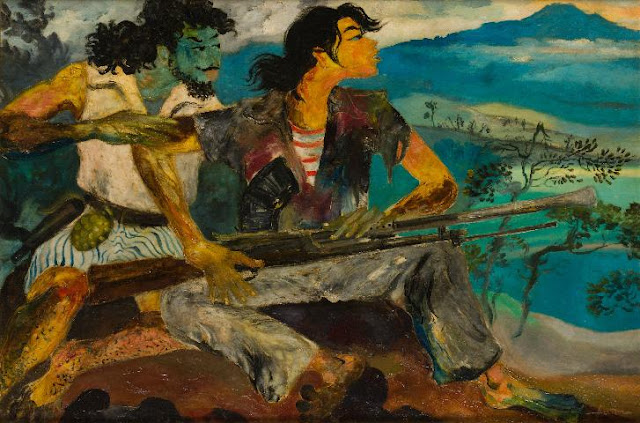 The National Gallery Singapore is officially opening its doors on November 24, but for the last couple of weeks, some members of the public and media have already had an opportunity to explore two permanent galleries in a ‘soft opening’ to allow museum officials to study the public flow through the vast building and iron out any quirks.
While the DBS Singapore Gallery’s artworks illustrate the evolution of art in Singapore from very early representations of an exotic tropical paradise in the 19th century to the development of a contemporary art, the UOB Southeast Asia Gallery puts the spotlight on modern art in the region with an inaugural exhibition, titled “Between Declarations and Dreams, Art of SEA since the 19th century,” which aims to present a regional narrative of modern art developed through a novel thematic, chronological approach rather than the usual geographically-based presentation.

Housed in the historic former supreme court building, built in the 1930s, the Southeast Asia Gallery is spread over 15 rooms, spanning three levels and covers 3,000 sq. m (over 32,000 sq. ft.), and includes over 400 artworks that makes it the largest exhibition ever mounted on modern art of Southeast Asia.

“The aim was not to offer a comprehensive overview of art in each country, but to seek for a narrative that goes beyond national framework, and by doing so creating a platform to examine, understand, and reimagine ‘Southeast Asia’, and to provide a sense of history and histories,” explained senior curator Lisa Horikawa at the press preview, adding that the major section on 19th-century art especially contributes to this purpose.

At various selected strategic junctures of the exhibition, visual cultural materials, including architecture, photography, illustrations, film, and rare books have been incorporated into the display to demonstrate the reciprocal relationship between art and wider cultural practices and social contexts.

While Singapore has an extensive national collection of art from the region, curators were keen to show the best possible examples of artwork and so reached out to important collections in the region and beyond. At its opening, the museum will display important pieces borrowed from 15 institutions including the National Museum of the Philippines, the Central Bank of the Philippines (Félix Resurrección Hidalgo’s Christian Virgins Exposed to the Populace), Vietnam Fine Arts Museum, National Gallery Bangkok, and Fukuoka Asian Art Museum.

Horikawa explained the opening exhibition, Between declarations and dreams, conveys the position of modern artists in Southeast Asia, working between declarations – the historical, ideological, or political markers that frame their work, and dreams – the subjective, expressive and creative logics of art.

The chronological narrative unravels with the 19th-century section looking at the period of colonial encounters and their defining impact on visual representations in an atmosphere beset by anxiety and social stability. Two of the highlights of that section are Raden Saleh’s Wounded Lion, c. 1839 (bought at Christies in 2010 for $856,635) and Juan Luna’s Spain and the Philippines, 1884, which has the two countries depicted as ladies walking together toward a bright future with one putting her protective arm over the other.

The 1900s-1940s Imagining Country and Self section examines the period that showed a heightened sensibility to a sense of “place” connected to a nascent sense of nationalism with works by local artists expressing a deeper connection to their home with picturesque landscape paintings (U Ba Nyan, Nguyen Phan Chanh, Khien Yimsiri).

Elsewhere, Manifesting the Nation is a section focused on the 1950s-1960s, a period that saw artists such as S Sudjojono, Edgar Talusan Fernandez, Chua Mia Tee chronicle the struggle for independence and a background of postwar nationalism rising with the subsequent post-colonial ideological rule dividing or isolating some countries, which in turn influenced artistic directions, both directly and indirectly.

The final section, Re:Defining Art (post 1970s), see artists becoming even more concerned with political and cultural issues. Using a wider range of approaches and materials, they experimented with genres such as installation, video, photography, and performance.