REVIEW: “The Rise and Fall of Little Voice” at Drama 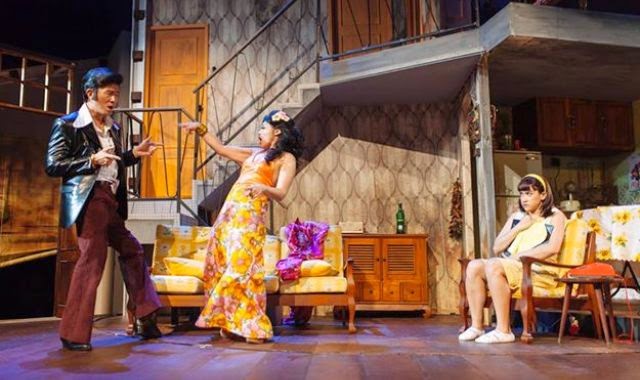 The 1992 play by English playwright Jim Cartwright won an Olivier Award for Best Comedy, but there is actually little comedy in the underlying dramatic story “The Rise and Fall of Little Voice.” Nevertheless, the current performance by Pangdenomium! at the Drama Centre brings plenty of laughs through localized references and caricatures played with pantomime bravado.

Ever since her father passed away, the socially awkward and painfully shy LV finds solace by locking herself away in her bedroom and listening to his old LPs. She has a knack for mimicking various great singers, but her music and singing gets on the nerve of her slutty and alcoholic mother Mari (played by Denise Tan with a script that is unrelentingly foul-mouthed). LV’s talent is “discovered” by a wheeler-dealer who fancies himself a talent manager Ray (played sleazily by Adrian Pang), who is dating her mother. Seeing another way to easy money, Ray, and then Mari, push the timid singer to perform on stage which is where everything goes from bad to worse.

Intertwined in the story are three other characters, the mother’s neighbor and only friend Sadie (an under-extended Siti Khalijah), a quiet telephone repairman (Shane Mardjuki) who understands LV’s shyness, and the club owner (Rishi Budhrani, in great on ‘quick his feet’ form).

The play is dominated in the first half by the acerbic Mari, a queen of one-line put downs, and her rather mean interactions with the various characters. It is a difficult role to play, not least because it is played on mainly one tone which together with the constant spewing vulgarities means there are practically no redeeming features to the character to make her sympathetic.

While the original play (and later film) was set in the north of England in the 1990s, director Tracie Pang has adapted it to Singapore, circa 1974, which will appeal to the likely audience. There are plenty of references to the period from the government’s too successful “Two is enough” campaign, which “encouraged” Singaporeans to only have no more than two children, to Dick Lee’s first album and the heyday of the notorious Bugis Street nightlife, though many of the references are dropped in for quick comic effect rather than being integral to the storyline.

There are plenty of reasons to see this play, but the standout one is the tour de force performance by talented young actress and singer Mina Kaye. Her performance as LV is nothing short of enthralling, as she fully commits to the drama, while also lighting up the house with her careful mimicry of famous divas like Judy Garland, Billy Holiday, and Shirley Bassey. One only wishes she had more time on stage and her show-stealing numbers in the second half could last longer.

The show is on at the Drama Centre until May 18.

As fist published on Blouinartinfo.com