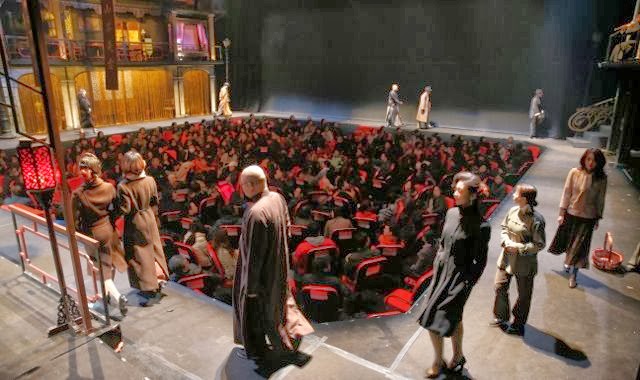 Everyone has a story to tell and that story is always tightly connected to others. Every decision has a consequence that leads one down a path which may have lifelong consequences. One earlier decision taken differently could have changed your entire life. This is the premise of Stan Lai’s eight-hour play “A Dream Like A Dream.”

In a world of limited attention visual span, when a reader will spend less than a minute to scan through a newspaper article or watch a video online, Lai’s play takes its audience through a slow yet captivating journey of several life stories that draws you in and makes you forget time, eager to learn more and more about each character. A dying patient is telling his story to a young doctor, and like Russian nested dolls, other stories unveil, with more stories within stories. Patterns of loves and losses emerge through time and place, as you are taken on a grand saga from contemporary Taiwan through the exotic Shanghai of the 1920s and the Bohemian Montmartre in Paris of the same period, and a chateau in Normandy, France with a mysterious lake.

The play is a bit like an urban myth. It has been described as a masterpiece, possibly the best Chinese language play ever, yet because of its staging requirements — 27 actors playing nearly 100 roles, 400 costumes, rotating sets and a sunken lotus pond in the middle of the stage for the audience to sit on swiveling chairs for a 360-degree immersive experience — few have actually seen it.

Since 2000, when it was first performed in Taiwan, the play has only been staged a few times: in 2002 in Hong Kong, in 2005 in Taiwan, and now it is showing in Singapore until Sunday (only a few restricted view tickets are now available).

Lai, who is playwright and director, has acknowledged that this is the one play where he let his “experimental spirit” run free and unrestricted from commercial considerations. As a result, the play is staged for the 200-strong audience seated in the Lotus Pond. They are the ones the actors are mainly facing, thereby experiencing the full dramatic performance and appreciating the décor while those left outside the pond (the vast majority in the case of the performances at the Esplanade’s theater) are sometimes left feeling like poor people pressing their head against a glass window trying to catch glimpse of the fabulous banquet happening inside the manor.

The contrasting experiences is particularly noticeable in the third part of the play, when the front of the stage is loaded with heavy Chinese furniture that force audience members in the stalls to peep through the lattice works to glimpse the performance that is happening at the back of the stage, way off. Maybe because the play is actually so good, frustration will reach a high note when at one of the crucial emotional scenes, all the actors are standing with their backs to the stalls and one knows something special and highly visual is happening but it remains unseen by most.

Mercifully, “A Dream like a Dream” offers stellar performances by its experienced actors (and for those not understanding Mandarin, an excellent simultaneous translation), that eases the pain of missing some of the visual action.

The sophisticated storylines effortlessly move from present to past throughout the play, yet remaining very clear to the audience thanks to the director’s decision to have several actors play the same one character on stage. Summer Qing is mesmerizing as Koo Hsiang Lan (one of the key characters), sure of her powers of seduction, growing in confidence as a liberated woman, and facing personal tragedy stoically, while Hugh Hu convincingly plays the young architect abandoned by his wife and plagued by a mysterious illness who searches for meaning in his life. Both characters make choices that the playwright cleverly tricks the audience into romanticizing even further, hoping for connections between the two characters.

"A Dream like a Dream" is a special play. But it needs to be seen in the “right” frame — inside the lotus pond — to feel its full impact. On the edges, one is left dreaming of being inside.