REVIEW: Harsh Words but Plenty of Laughs with Fat Pig 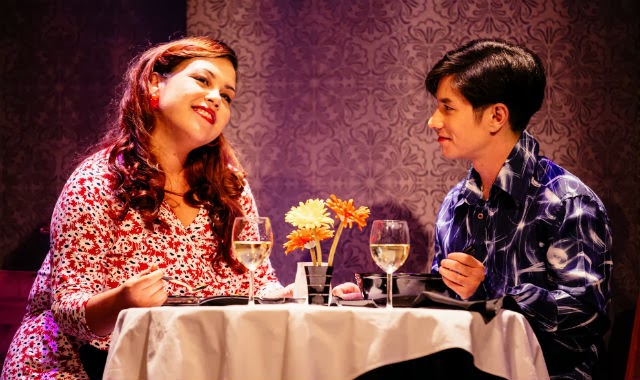 Neil Labute’s play, “Fat Pig,” is a sharp observation of an unforgiving society that judges people on looks, putting pressure on individuals to conform to a certain ideal. This is summed up by one of his characters who suggests biblical precedent with Noah for pairing the same kind of animals together on his ark, and going on to argue, attractive people should run with their own kind: a fat girl should date a fat guy or a bald one!

In “Fat Pig,” the plus-sized, self-depreciating Helen meets and starts dating Tom, a young, good looking man who has had a string of shallow relationships with attractive girls. Tom is soon drawn to Helen, and though he slowly realizes she makes him want to be better man, he also feels a great deal of shame to be seen with her. Catching Tom and Helen together, Carter, his obnoxious best friend and co-worker, makes fun of Helen and ensures everyone at their office knows of Tom’s uncharacteristic attraction to a large woman. Meanwhile, learning of Tom’s new relationship, his ex-girlfriend Jeannie takes Tom’s choice as a personal insult, wondering how he could love a fat girl rather than her and pondering whether his love of a larger person means he must have thought she is also fat.

LaBute’s play, which was nominated for an Olivier Award for Best New Comedy in 2005, is full of nasty jests, caustic criticism, and self-depreciating jokes that will also make you think and sometimes make you guilty for joining in with the laughter.

The play’s success hinges largely on the casting, and there are issues in this production by Pangdemonium, currently showing at the DBS Theater. Playing Tom requires the actor to navigate a fine line between absolute self-confidence and a certain sensitivity that would allow the character to see beyond Helen’s physique and appreciate her sharp-wit and warmth. However, in this production, Gavin Yap’s Tom is more of a nervous, needy nerd who seems to have problems making eye contact. The portrayal lacks the swagger one would expect from a good looking lad, meanwhile Helen (played by the attractive Frances Lee), who Tom and Carter may feel should be over the moon for just dating him, all too quickly tires of his insecurities and it’s hard to see why they would remain together.

While the chemistry between the two actors improved during the course of the play, one wishes that from the start, Yap had played Tom with the self-confidence Zachary Ibrahim gives Carter, playing him as an unapologetic chauvinistic “pig,” while Elizabeth Lazan as Jeannie is a convincing pretty but insecure ex-girlfriend.