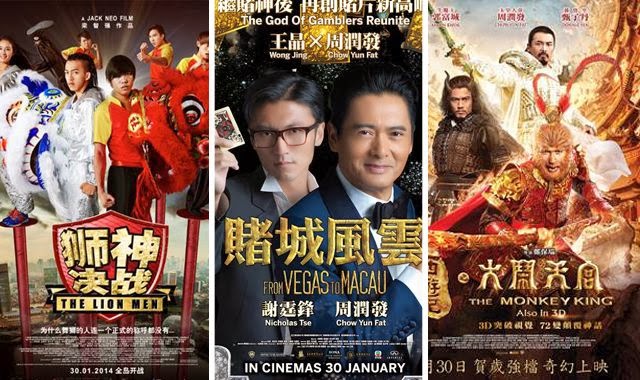 The new lunar year holiday period is important for movie producers in Asia and movie goers can expect a slew of new releases over the next couple of weeks. Opening or in preview in Singapore Thursday, January 30, are the following movies:

Leading the pack will be the 3D epic blockbuster “The Monkey King,” based on a classic Chinese adventure novel Journey to the West, and with plenty of star power including an unrecognizable Donnie Yen as the mischievous Monkey King, Aaron Kowk as the Bull Demon King, and Chow Yun-Fat as the Jade Emperor.
The storyline focuses on the early days of the Monkey King story, his training with a staff that will become his weapon of choice, and his destructive antics that will eventually get him imprisoned by the Jade Emperor for 500 years under Five Finger Mountain. Expect plenty of computer generated imageries and spectacular duels.
Trailer:
Chow Yun-Fat is also appearing in “From Vegas to Macau,” a light-hearted comedy by director Wong Jing that also stars Nicolas Tse and Chapman To. The film references Wong’s previous movies that featured gambling, including the hugely successful 1989 “God of Gamblers” which also starred Chow. Here the actor plays a retired Las Vegas security consultant, Ken AKA “Magic Hand” – so named as he is said to be able to identify cards by just touching them – returning to his hometown Macau and soon finding himself embroiled in a series of events that lead him to set up the perfect sting aimed at bringing down a gambling syndicate.
Trailer:
The New Lunar Year in Singapore also brings out a new Jack Neo comedy. This year, it’s “The Lion Men” starring Tosh Zhang and Wang Weiliang, two of the young actors ‘discovered’ in his movie “Ah Boys to Men,” the highest grossing local movie. Zhang plays the cocky star performer of a lion dance troop who is expelled from the troupe by his master after getting in a brawl, while Wang plays his shy number 2 who is promoted to lead the troupe but must first fight his fear of heights. Meanwhile, Zhang sets up his own troupe fusing hip hop dancing with lion dance movements, and the two must eventually face off in a competition though the real competition is a fight for the love of the same girl (Eva Cheng).
Trailer:
Early reviews for “The Lion Men” and “The Monkey King” have not been kind, though “From Vegas to Macau” seems like the better bet and Neo’s movie will likely play well to a loyal local crowd.