Published: The Collector: Silvio Denz and his Lalique Glass Menagerie 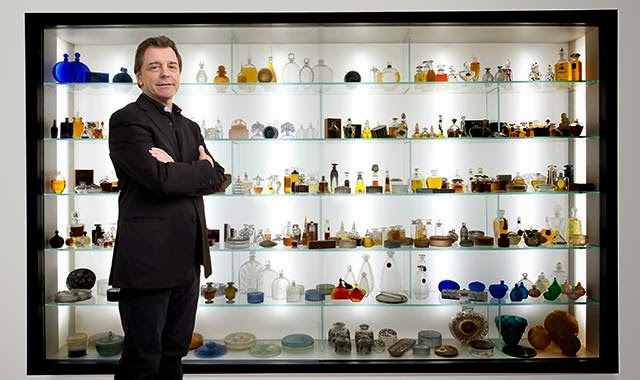 As Silvio Denz surveys the display of six beautiful Lalique glass vases and bowls from the 1920s through the 1940s that has just been carefully unpacked in front of him, the businessman is quick to make a decision. “This one is for me,” he says, pointing to a tall vase with four leaf-shaped ornaments in high relief, a Saint-Emilion model. “The rest are for the Lalique company.”

Denz, the world’s biggest collector of perfume bottles created by revolutionary French glass artist René Lalique, has amassed more than 650 flacons over the last 17 years, cherry-picking from some of the most prestigious collections that came to market during that period. “I think I have maybe 85 percent of all perfume bottles made by René Lalique that still exist,” Denz says over lunch.


“From the beginning Silvio knew what he liked and only wanted the best,” says Christie Mayer Lefkowith, a perfume-bottle expert who has written several books on the subject, including The Art of Perfume: Discovering and Collecting Perfume Bottles (Thames and Hudson) and The Art of René Lalique: Flacons and Powder Boxes (Editions Stylissimo). “The first flacons he bought were super top, and he’s always been a very selective buyer, refusing fabulous things because they had a chip that was only visible with a magnifying glass. That’s what makes his collection a very important one, because he has the best.”

Lefkowith, who has been advising Denz since the start, met the Swiss native in 1997 while she was organizing auctions of perfume bottles at Phillips in Geneva. At the time, Denz was already well established in the perfume world, having taken  over his family’s perfume enterprise, Alrodo S.A., in 1980 and transformed it into a major Swiss perfume chain with over 120 points of sales. “I came to Phillips in Geneva to view the auction exhibition, and I saw some beautiful bottles,” Denz recalls. “I didn’t really know anything about Lalique at the time, but I really liked them. I met Christie, who spent a couple of  hours explaining to me the history behind those bottles. That weekend I was flying to Jerusalem for work, and from there I decided to bid for about eight bottles over the phone. That’s how it all started. After that it became like a virus.”

Because it dovetailed with his perfume business, Denz started collecting the inspiring antique bottles, at first embracing a large number of artists and producers — Baccarat, Julien Viard, André Jollivet, Georges Dumoulin. However,  he soon decided to focus exclusively on building a comprehensive collection of Lalique flacons. “I chose René Lalique’s because for me they are the most beautiful, and I was also interested in him as a personality and how his designs told a story, or a history, spread over two world wars, embracing Art Nouveau and Art Deco,” he explains. 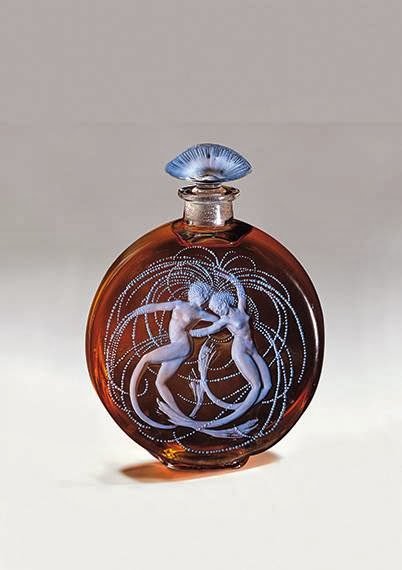 In 1998 Denz acquired about 50 pieces at Sotheby’s New York, including such important examples as Carnette Fleurs and Quatre Aigles from the collection of Americans Glenn and Mary Lou Utt, and then bought nearly 300 others from the collection of New York antique dealer David Weinstein in 2001. Among the treasure trove was René Lalique’s first glass bottle, dating from the turn of the century and using the lost-wax technique. The small teardrop flacon with a fish motif was created in a kiln in his own kitchen, causing a fire. Lalique escaped after grabbing the bottle, which he thereafter considered a good-luck charm. Finally, in 2005 Denz bought 30 rare pieces at Drouot from the estate sale of Marie-Claude Lalique, René Lalique’s granddaughter. “That sale included a number of prototypes that never went into full production,” he says.

Lefkowith says the collection is representative of all the periods of René Lalique’s career. “It is a museum-quality collection, not only because some of the pieces are very important historically, but also because the collection itself tells a story of René Lalique as seen through the perfume bottles and the powder boxes. He was a phenomenal artist who was a precursor of Art Nouveau and was really avant-garde for his time.”

He sold Alrodo in 2000 to the French perfume chain Marionnaud and immediately founded Art & Fragrance S.A. to produce a variety of perfumes and cosmetics like Parfum Alain Delon, Parfums Gres, and Jaguar Fragrances.

He has shown a rare ability to marry his business interests with personal interests that range from art and architecture to wine. The oenophile, whose cellars boast some 35,000 bottles, has acquired two Saint-Emilion estates — Château Faugères and Château Péby Faugères, which received the prestigious designation grand cru classé in 2012. Denz has a broader interest in real estate, having redeveloped several high-end properties in London, and also has a commercial interest in a private art dealing firm based in Hong Kong that specializes in Surrealist painters like Magritte.

His personal art collection ranges from Old Masters like Peter Paul Rubens and Jan Brueghel the Elder and modernists like Fernand Léger and Marc Chagall to contemporary artists like Terry Rodgers and David LaChapelle. “For me it’s more about falling in love with a specific piece, because I have to live with it,” he explains, though he adds that he rarely feels attached to any work and would be quite happy to resell “for the right price.”

“I don’t see myself as a collector of art or a wine collector,” he says. “I don’t collect to say I have all of this. It doesn’t interest me. I buy what I like and what I think will appreciate in value. At one time I had a Modigliani, which I really loved, but someone came and offered me a crazy price, and I sold it. I had the opportunity to enjoy it very much in my home for two years, and when I sold it, it didn’t hurt.”

“There is only one piece that I really wouldn’t part with, which is Femme en Extase, by Ferdinand Hodler,” he says. “I can’t explain why I like it so much, but I wouldn’t sell.”

He feels very much the same about his Lalique collection, which he believes only makes sense if it stays together. “That’s why I have put it in a foundation, and if my son wants to sell it one day, he can only sell it as a whole.”

While Denz clearly feels bonded to the perfume bottle collection, business rivals should not assume this sensitivity extends to Lalique S.A., the renowned crystal and jewelry manufacturer he bought in 2008 through his Art & Fragrance company. Some may argue that the collector got the ultimate Lalique trophy when he bought the company, but Denz says his decision was a purely commercial one. “People thought I just loved the brand so much, I bought the company, but this is completely wrong, because I believe that in life there are certain destinies,” he explains. “I actually didn’t want to buy Lalique at all. I was only interested in the fragrances because I didn’t know anything about crystal, but I knew about perfume, and I was looking to buy to get the licenses for fragrances. I went to the owners and told them I only wanted the perfume section, but I was told I had to buy everything or nothing. I had to think hard about this because it wasn’t my métier. But I also knew that if I could restructure the company, I could make it a good business.”

His instinct proved right, and he managed to turn the struggling company around in the space of three years, diversifying with home furnishings and high-end jewelry to position it as a luxury lifestyle brand. And as the owner of Lalique S.A., Denz can indulge his collecting habit to expand the company’s archives. He also supports the Musée Lalique, set up by the French government in Wingen-sur-Moder, a village in Alsace near the Lalique workshop, where the public can admire more than 600 pieces of Lalique glasswork and jewelry, along with newer crystal creations, drawings, and molds. The museum’s display includes over 230 pieces on loan from Denz’s collection.

Denz laments that it has become increasingly difficult to find museum-quality pieces in perfect condition on the market. “Nowadays, it’s mainly through inheritance.” But that doesn’t mean he’s stopped looking. “This collection is like a puzzle that is never finished,” he says.

G.G. Weiner said…
I agree with Silvio Denz in that I too have aquired a near complete collection of Lalique car mascots (or hood ornaments),which include colour & tinted variations. Although I love them it would not hurt to sell or swop as this is the diversability of ones collection. One has to move on! G.G. Weiner is the author of the book "Unique Lalique Mascots".
Friday, May 02, 2014