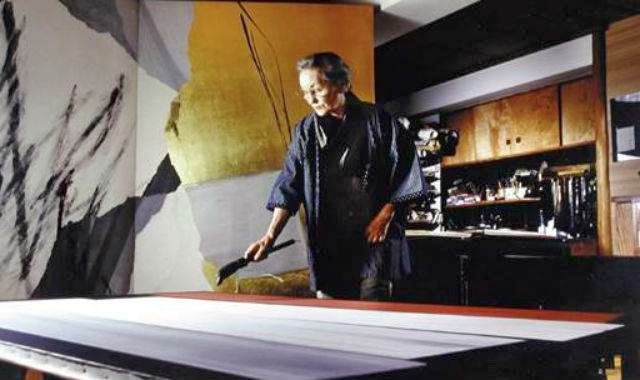 To celebrate Japanese artist Toko Shinoda’s 100th birthday, Nikei Fine Art is presenting a retrospective of the abstract artist’s work across both of its venues in Singapore.

Spanning 1964 to 2011, the dual exhibition showcases her strong calligraphic-style strokes and love of sumi-e ink (or ink wash) which she has, over the years, applied to materials like silver, gold, and platinum foils, as well as washi paper, giving her creations an oriental appeal.

Born on March 28, 1913, Shinoda started to study calligraphy when she was 9 years old, a skill she learned from her father. By the 1940s onwards, her calligraphy had evolved into an abstract expressionism style which was only reinforced by several trips to the United States in the 1950s.

She gained international recognition in 1954 through her large-scale mural for the Japanese pavilion in Sao Paulo, Brazil, designed by architect Kenzo Tange. This commission was followed by many others such as a relief and mural for the Kyoto International Conference Hall, a mural for the Japanese ambassador’s residence in Washington D.C., and a massive painting for the lobby of the Conrad Hotel in Tokyo. Today, one of her works is reportedly hanging in the Japanese Emperor’s private dining room, while the Metropolitan Museum of Art in New York was also reported to have acquired a piece in 2012.

Shinoda has a deep love for sumi ink, which can easily bleed into paper. “Color can never be determined exactly because it changes with the amount of water added, the temperature of the day and the humidity. This is its natural and essential charm,” the artist once said.

She has also cited Mount Fuji as her greatest source of inspiration, and regularly visits her farmhouse on Lake Yamanaka, at the foot of the dramatic mountain. “Sometimes when I see Mount Fuji in winter, pristine with snow and reaching to the heavens, I am filled with a desire to brush a huge, solitary stroke across it,” she once wrote.