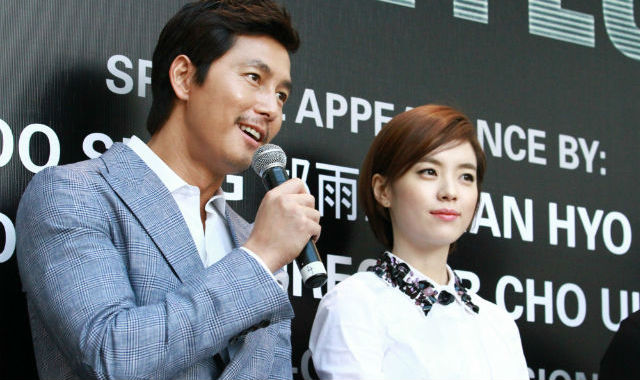 South Korean actor Jung Woo Sung says he was primarily inspired by Alain Delon’s performance in “The Samurai,” a 1967 film by Jean-Pierre Melville, when preparing for his first role as a villain in the recently released South Korean movie “Cold Eyes.”
Jung plays James, the cold-hearted leader of an armed criminal organization, while Delon was a hired assassin in “The Samurai.”

“I wanted to give a classic feel to James, my character in the film, and bring back some of the very cool and calm feel seen in old black-and-white films,” he said at a press conference in Singapore, ahead of the movie’s gala international opening on Friday night.
A rare local remake of a foreign film, the Hong Kong crime actioner produced by Johnnie To “Eye in the Sky,” “Cold Eyes” is performing well in the Korean box office with more than 5.5 million viewers. Jung said he agreed to the film without seeing a full script, based on the strength of the plot synopsis.
“I really liked the character, which is why I decided to take on the role,” he said, adding that he had no hesitation in playing the villain. The actor acknowledged that taking on such a character was an important step in his career, and that the film itself is a “big step forward” for the Korean film industry, because the crew was allowed to shoot inside Seoul.

Jung Woo Sung in a scene from “Cold Eyes”
Explaining further, Cho Ui-seok, who co-directed the film with Kim Byeong-seo, said that previously it had been extremely difficult to film inside the Korean capital because of permit restrictions. “A lot of films have their plot based in Seoul, but the filming actually takes place outside the city. I think the door is now open for more filmmakers to consider Seoul as a background,” he said.
Jung said he enjoyed filming with his co-stars, Sul Kyoung-gu, Han Hyo-joo, and Junho Lee of the Korean boy band 2PM. Jung remarked that he liked Lee’s passion and fresh approach. “It made me reflect on myself and I realized I shouldn’t forget to look at my job with fresh eyes,” he said.
Jung added that he was also impressed by Han’s willingness to experiment with a new character that was a break from the roles she usually took.
“In Korea there is a certain image of what Korean actresses should do. As a result they tend to confine themselves to a box, but Han didn’t try portray herself here as a ‘pretty’ actress, she was willing to try new things,” he noted of her role as an undercover cop. “I hope other Korean actresses will take on a similar attitude.”
The film will open in Singaporean theaters on September 5. It will have its North American premiere through a gala presentation at the Toronto International Film Festival (September 5-15), before heading to the Hawaii International Film Festival (October 10-20).
First written for sea.blouinartinfo.com