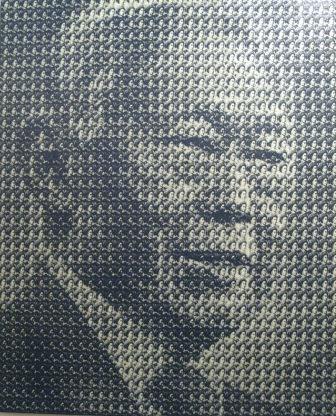 Having led his country to independence in 1965, Lee governed with an iron first as prime minister until 1990, and then stayed on in various senior government roles until retiring in 2011. But unlike many of the other Asian politicians of his time, he was always extremely careful that a cult of his image or his name should never develop. While Mao Zedong’s image has long become a recurring theme used by artists wanting to comment on political and social changes in China, Lee’s image has been, until a few years ago, a no-go area. Even today, though some have cautiously started to use his image in artworks, they are mostly sticking to a conventional portraiture with positive, bright colors that give a fresh pop art feel. Only a handful of artists have gone beyond the mere factual representation and offered a more politicized representation.

One of the most interesting works is Jason Wee’s 2006 “Self-Portrait (No More Tears Mr. Lee),” which was made using 8,000 plastic shampoo bottle caps placed on an angled pedestal. With a combination of opened and closed bottle caps, Wee created a pixel-like portrait that referred to an historical and emotional moment in 1965, when Lee cried during a televised announcement of the breakdown in political talks that resulted in Singapore’s separation from the Federation of Malaya, which at the time most people thought would doom the small, now independent, city-state to failure.

In 2010, Singaporean artist Jimmy Ong's three watercolors titled “Papa Can You Hear Me,” reflected on the sensitive issue of homosexuality — homosexual acts are illegal — in Singapore, as well as Lee’s change in attitude to support the opening of casinos in the city state.

For Lee’s 90th birthday, BLOUIN ARTINFO picks eight artworks featuring the iconic former political leader, who is widely regarded as the father of modern Singapore. Click on the slideshow to see them.