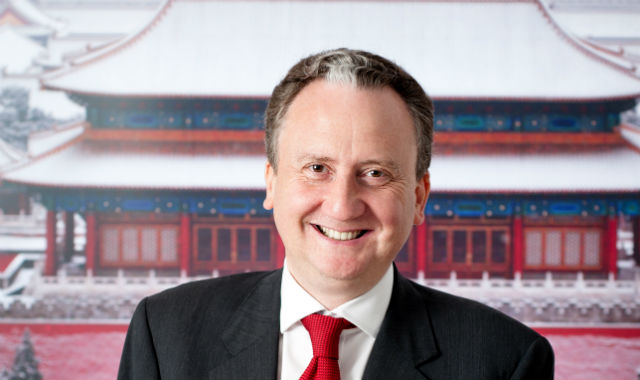 Jonathan Stone, Chairman and International Head of Asian Art at Christie's, discussed the state of the Asian art market on Friday over lunch with a handful of reporters, and also reviewed the auction house’s plans to hold its first ever auctions in Shanghai and Mumbai later this year. Here is an abbreviated version of the lively conversation:

How has the Asian art market performed so far this year?

Any categories that seem to be performing better?

No. What was encouraging was that all the categories for Asian art did well in the first half of the year. Traditional Chinese paintings, including modern painting, were particularly good, Chinese works of art also did well, and we had record sold-through rates, which means the number of lots that we sold in the sale were very high, which is also very encouraging, instead of just having spikes of a few items doing extremely well.

What about Chinese buyers, are they still active?

Mainland Chinese buyers remain extremely important, as are those from Greater China and at the top end of the market you’re still seeing Western buyers for Asian art. Although China is the one everybody thinks about, I think it’s encouraging there is a supporting cast, so to speak, so not all the eggs are in China. There is great interest from Indonesia, which is why we increased the number of lots in Southeast Asian modern and contemporary art sales. These have almost doubled in the last year or so. In Singapore, the number of buyers is up 20 percent this year over last year. What’s quite good about Southeast Asian art too is that it’s becoming much more international, we see buyers in Taiwan and other Asian countries that are looking at that category as well. It’s encouraging that Southeast Asian art is becoming increasingly recognized.

You will be holding your first ever sales in India in December. Why now and why Mumbai?

There are collectors both in Delhi and Mumbai and we will have an exhibition in Delhi, but Mumbai is the commercial center and this is where we have our office, so there is a practical aspect to choosing Mumbai. And ‘now’? Because there is the opportunity. We’ve seen an increasing number of Indian buyers, and contemporary and modern Indian art grew very spectacularly up to 2008. It then had a couple of difficult years, but it’s recovered and come back as a more stable market. But this auction is not about a specific category of selling, it’s about engaging with a number of Indian clients, it’s about developing clients, not just about selling Indian art. Hopefully this will be an entry point into the bigger world of what we do. We believe there is a market to be cultivated there.

How big will the sale be?

It’s not going to be a big value sale, much like the way the Shanghai evening sales in September will not be such a great value either, because it’s as much about creating a presence in these markets than it is about creating a sale. There will be less than 100 lots for the Mumbai auction and about 40 lots in Shanghai. It’s about showing what Christie’s is about.

But surely collectors in Shanghai already know that?

There are people who have not come to Hong Kong and it’s about reaching new collectors and it’s about Christie’s being able to offer it in China in exactly the same way than we operate in London, Paris, or New York.

Do you anticipate that Shanghai’s auctions, down the line, could cannibalize Hong Kong’s auctions?

We don’t think it’s about rivaling Hong Kong, but about being incremental to Hong Kong. A parallel could be made between London and Paris, when we opened in Paris? in 2001. A lot of people saw there could be cannibalization, but it was really an incrementation.

Why did you choose Shanghai over Beijing?

Partly because the Shanghai local government was very open and welcoming. The Chinese houses have a very strong presence in Beijing and there is something to be said for developing Shanghai. There is an awful lot of collectors there.

What has happened with your licensing agreement with Forever?

It was just a trademark agreement. There was an amicable parting of ways that is official, I think, this month. The idea was always that we would one day operate as Christies.

There seems to be an increase in private sales business of late?

Yes, there has been an increase. There is demand from clients, but for us it’s also a proactive strategy. I think currently it represents about 20 per cent of our business and it’s increasing.

Do these private sales particularly appeal to Chinese buyers?

I think there will be an increasing interest from them, but a lot of Chinese buyers still like the validation of the auction process which is a competition and you can see how it justifies the price. The opportunity in Asia for us for private sales is where you have an iconic work and the value is very clear.

How busy is the Singapore Freeport for Christie’s?

It is beginning to fill up, but it has been a bit slow. I supposed we imagined there would be more activity and more people coming that. That has eventually happened. I don’t why that is, but there is quite a lot of competition for storage now. But maybe this is one occasion when one overestimated the demand

How will the Singapore Freeport be affected by the upcoming Freeport in China?

Well, that would be even more competition!-AS FIRST PUBLISHED ON sea.blouinartinfo.com