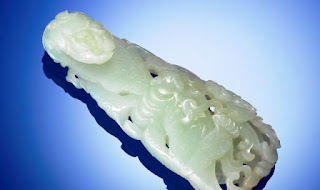 Bonhams Hong Kong will be offering a large collection of jade belt hooks on May 26.

The “Jason Chen collection,” part of Bonhams’ Chinese Ceramics & Works of Art auction, comprises 150 belt hooks of various shapes and sizes offered in 71 lots with no reserve price on any of the lots. The owner acquired all the hooks over the last 15 years, primarily at auctions around the world.

Jade belt hooks date back to the Liangzhu culture (3300 to 2250 BCE), which placed great value in the green stone, and many were found by archeologists in burial sites. The tradition of using belt hooks, worn by dignitaries, was further developed during the Western Han dynasty. “It was really a sign of status, a bit like jewelry. The wealthier you were the more elaborate the carvings. Most of the time they have a dragon head,” explains John Chong, Bonhams’ specialist for Chinese Works of Art.

Though they became less fashionable during the Eastern Han dynasties, losing their practical function, they rose back in popularity throughout the Ming and Qing dynasties, becoming purely decorative ornaments. They continued though to be made in the traditional shape, which had become fashionable during the Han dynasty, but were also made in more fragile materials like porcelain and glass.

The collection offered for auction includes hooks dating back to the Yuan dynasty and continues to the republic period. One highlight of the sale is a rare white jade “butterfly” belt hook dated to the Qianlong period, which was once in the Alan and Simone Hartman collection and was exhibited at the Museum of Fine Arts, Boston in 2004. Chong estimates the overall value at HK$3-4 million.