Art Basel in HK Scorecard: What Worked and What Didn't 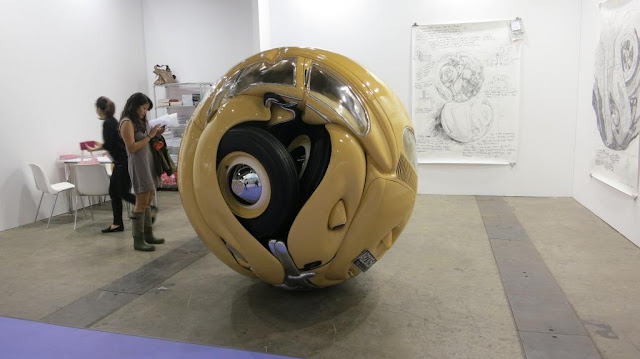 The inaugural Art Basel in Hong Kong closed its doors on Sunday. After a slow start on the first VIP opening on Wednesday, partly due to damp weather conditions, the fair was in full swing by Friday. Organizers reported that by Sunday night, 60,000 visitors had come to explore 245 galleries spread over the 366,000 sq. ft. of exhibition hall space. 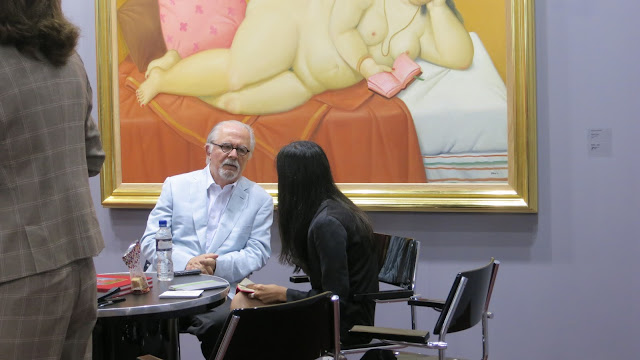 Although the fair's previous incarnation as Art HK last year had already been running smoothly, the new Art Basel organizers brought a new level of professionalism and branding that propelled the fair to the global stage. Importantly, sales were strong, attesting to the financial health of Asian collectors’ wallets.


Yet, if Art Basel in Hong Kong seemed to tick all the boxes, from efficient Swiss organization to the attendance of a new flock of collectors, a little ‘je ne sais quoi’ — maybe an Asian soul — was missing to give it a straight A’s on its report card. 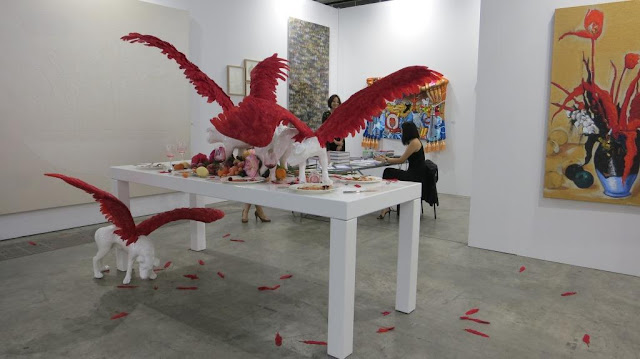 With slightly fewer galleries than last year spread over the same surface area, organizers created a pleasant open environment for fair goers. Corridors were wider, and artworks were given space to breathe and be admired from a distance. The increase by 80cm in the height of the hanging walls also helped better showcase large works.

“You can clearly see now the Art Basel footprint in the organization and structure,” said Hans-Kristian Hoejsgaard, CEO of Davidoff and an art collector. “Considering it’s only year one, it’s going to catch up with Art Miami very soon, although it has a very different feel to Art Miami.”

The VIP room on the third floor offered stunning views of the harbor, along with booths by various sponsors, such as Ruinart champagne, Davidoff cigars, and Audemars Piguet watches. There was also plenty of lounge space with swanky furniture for collectors to relax and mingle. 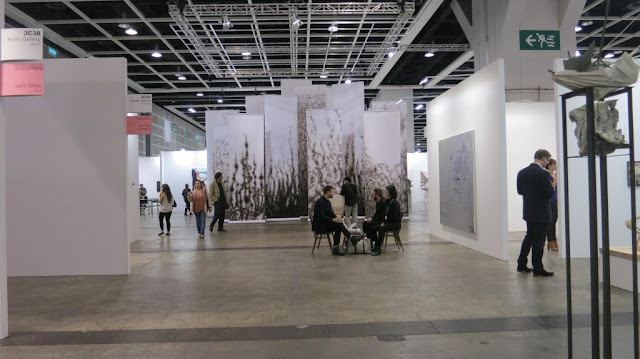 There were impressive works in many booths – of note were the combined booths of Victoria Miro and Ota Fine Arts that presented a range of historical and recent works by Japanese avant-garde artist Yayoi Kusama, along with the booth of Galerie Gmurzynska which was dedicated to Colombian artist Fernando Botero.

But with Art Basel just around the corner, many collectors felt some of the galleries that are participating in both fairs did not bring their best works to the Hong Kong edition. And while there were plenty of attention-grabbing works, they tended to be of the easily accessible pop culture variety, with little space given to more conceptual works or video installations. Many galleries did not appear to take chances. “It’s a bit safer this year, less exciting. I think many galleries are still feeling the audience and the market,” noted Malaysian dealer Valentine Willie of Manila Contemporary, which sold out its booth of works by young Filipino artist Winner Jumalon. 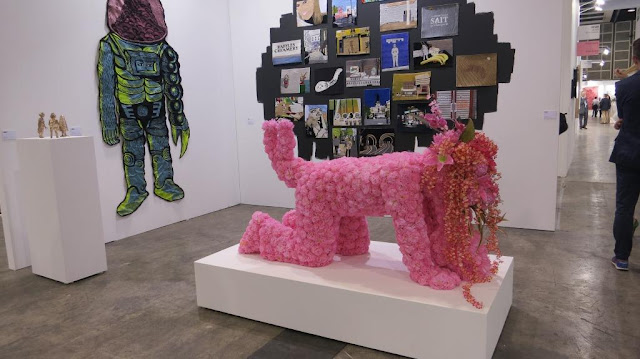 Collectors in attendance: B+

There were some big collector names, such as Russian billionaire Roman Abramovich and his partner Dasha Zhukova, Chinese collectors Yang Bin, Indonesian collectors Budi Tek andDeddy Kusuma, Yahoo founder Jerry Yang, and a touch of glamour provided by supermodelKate Moss, singer Gigi Leung, actress Rosamund Kwan, and bad boy actor Edison Chen. Art Basel in Hong Kong did not quite have the celebrity X-factor of its big sister in Miami, but there was definitely a very good social circuit all around the fair that made it a society event.

That said, galleries gave a mixed report on the types of collectors who visited the fair — some saw new collectors to the region such as the young Europeans that fair director Marc Spieglerpredicted would attend — while others did not see a great difference in the visitor demographic compared to the previous Art HK fair. 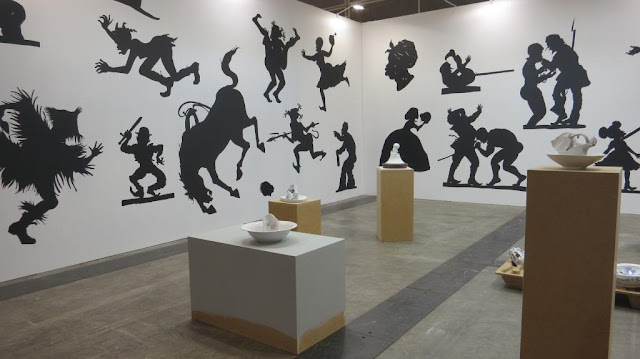 Hong Kong-based De Sarthe Gallery reported a similar turnout of collectors, with no significant numbers of Europeans dropping by their booth. All its clients were Asian, from countries such as Taiwan, China, and Indonesia, said director Pascal de Sarthe, adding that the gallery raked in US$4 million in total sales. At Manila Contemporary, Willie also said he hadn’t noticed many different collectors. The gallery sold all its six works by Jumalon but these went to known collectors in the region.

But Pace Gallery, which has branches in New York, London, and Beijing, told a different story. The gallery saw visitors from Europe who were visiting Hong Kong for the first time. “They were drawn by the Basel name and were interested to come,” said Sylvie Tiao, who was in charge of public relations. The gallery did well in sales, selling out its Yoshitomo Nara works as well asZhang Xiaogang pieces.


Long March Space, one of the Beijing's top galleries, did see a few European collectors drop in, though director Theresa Liang said that Mainland collectors dominated. “But from what I can feel, there's definitely a hype in the Mainland about the Basel fair,” she said.

Berlin-based Galerie EIGEN + ART also saw a sizeable number of European visitors drawn by the Basel brand name, especially younger ones who find it easier to make the trip to Hong Kong. “A lot of them are very global, very busy, they came for only one day,” said Kerstin Wahala, one of the gallery's partners. “They are doing a big tour — Hong Kong first, then Venice Biennale, then Art Basel in Basel. I heard a lot of, 'See you next week in Venice!'”

While the buzz was generally very positive about the fair, the same criticisms were often heard: “a bit too clinical” and “lacking identity.”

Saatchi Gallery director Nigel Hurst said that although the fair was easy to navigate and hugely well organized, the fair was “in danger of becoming too international.”

“There is still an Asian flavor, but they have to be careful that it doesn’t disappear. There is still 50 percent of Asian galleries, but a lot of them are not showing Asian art, they’re showing international artists,” Hurst said. “Hopefully they will get the balance right. I think that it’s less Asian-orientated than it was, and I think it’s important for Hong Kong, Basel, and Miami to have their own focuses.”

One well-known European collector of Chinese art quipped it was now time for Hong Kong to have a “Salon des Refusés,” where less conventional and less commercial art can be highlighted.

Ultimately fairs are not museums. Their purpose is to deliver sales to the exhibitors and Art Basel in Hong Kong did produce some solid results for many galleries, with several reporting they were completely sold out within the first few days.

Bethany Brady, director of Paul Kasmin Gallery, noted some different buying patterns in this Hong Kong edition compared with the previous year, but also compared with other Basel fairs. “In previous years there was a lot happening after, and this year there is a lot happening on site,” she explained adding that unlike other large fairs, collectors did not all rush on the first day to buy, but made time to do their research and come back, buying later.