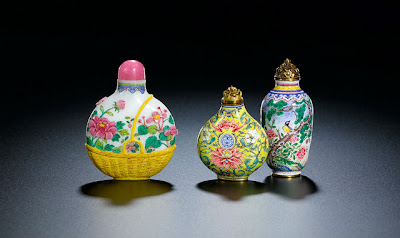 Sotheby’s Hong Kong has managed a small coup by scooping the latest part in the sale of the famed Mary and George Bloch snuff bottle collection. To date, Bohnams had been auctioning the collection in parts, achieving a full sale at each of their five auctions since 2010.

Mary and her late husband George Bloch amassed an unrivalled collection of over 1,700 snuff bottles spanning three centuries of top Chinese craftsmanship. Since Mr. Bloch passed away in 2009, the collection has been broken up and is expected to be sold in 10 parts.
Snuff, a fine powder of dried tobacco often mixed with herbs and spices such as camphor, jasmine and mint, was first introduced to China by European travelers in the 17th century. Because of the humid climate in Asia that tended to cake the power, the traditional Western snuffboxes were replaced by small airtight bottles which kept the powder dry.
While bronze was used during the Shunzhi period (1644-61), more sophisticated materials like enamel, jade, and ivory came into use in the Kangxi period (1662-1722). Those reserved for the Imperial court were often miniature works of art in their own right.
The most expensive snuff bottle from the Bloch Collection, which set a world record, was sold in November 2011 to an anonymous Asian telephone bidder for HK$25.3 million (US$3.33 million at the time).
The Sotheby’s auction will take place on May 27 during Art Basel Hong Kong rather than as part of Sotheby’s Hong Kong spring auction taking place this month.