Director Glen Goei on “The Importance of Being Earnest” 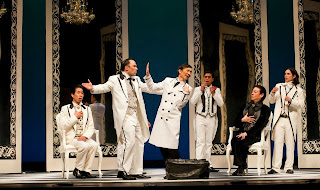 Oscar Wilde’s “The Importance of Being Earnest” was written at a time when the famed writer was in a relationship with Lord Alfred Douglas(nicknamed Bosie), an affair that eventually led to his downfall and imprisonment.


As in Wilde’s other works, the play is loaded with bon mots, and over the years the dialogue has often been taken as possessing symbolisms related to the playwright’s own life and personal situation.
In 2009, director Glen Goei staged the well-known work to great acclaim with theater troupe W!ld Rice and an all-male cast. As the company gets ready to reprise the play this month, ARTINFO chatted with the Singaporean director about the production and his take on the play.
Why did you decide to use an all-male cast?
I made the decision partly because on reading it again, I could hear Wilde’s voice in every character and by playing it with an all-male cast, I felt the audience would forget about the gender of the characters and only listen to Wilde’s wit and language.
Does this bring a new layer of meaning to the text?
As an artist, I never really consciously think about these things — it was merely instinctive. But given the context here in Singapore, where we still live under the shadow of penal code 377A which criminalizes homosexuals, I guess casting an all-male cast does give the play another meaning and makes it contemporary and relevant.
What has been the main difficulty with this staging?
Getting a cast who understand how to do comedy but more importantly, how to handle and bring alive Wilde’s wit and language.
Were you concerned three years ago with the local reaction?
As artists, we love provocation and we love a response!
Is this latest staging any different?
We will be presenting a new string quartet playing live on stage. They have been handpicked and nurtured by the Tang Quartet, who was playing last time. I teasingly call them the Super Junior Quartet because they are young and sexy!
Any change to the décor and costumes?
My motto is “Don’t change it if it’s not broke.”
What’s your favorite line in the play?
“To lose one’s parent is a misfortune; to lose two seems like carelessness.”
What’s your favorite Oscar Wilde play?
Earnest. Alan Bennett described it as “the perfect play.”
Why do you think this play has endured for so long?
It pokes fun at all the usual human foibles and weaknesses which we can identify with, but with such style, irony, and humor.
What do you think Oscar Wilde would have thought of this staging?
I think he would have loved it. Never in his imagination would he have dreamed of having his Earnest performed by an all-male cast in an Asian city!
“The Importance of Being Earnest” will run April 10 to May 4 at the Drama Centre Theatre.