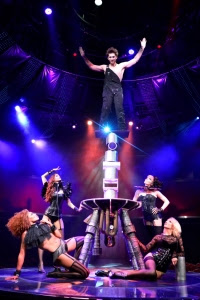 Producers of Le Noir, a new circus production at the Marina Bay Sands Theatre in Singapore, proudly highlight the Cirque du Soleil alumni amongst their cast of performers but they are not putting on a copy-cat show.

The small circular stage at the end of a short runway is miles away from the grand productions the famed Canadian troupe puts up. Still, the staging is actually used to full effect. 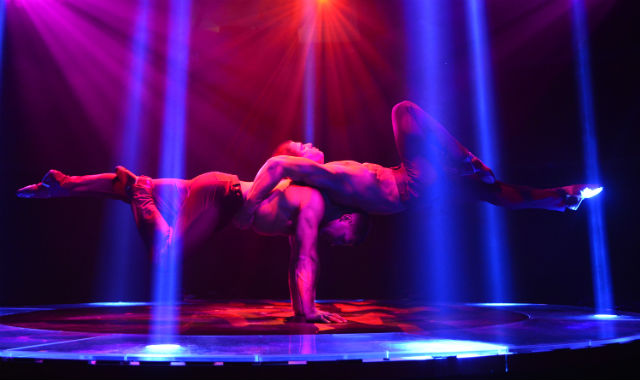 Le Noir delivers solid energetic performances and plenty of thrills and breath-taking moments to make for a great evening out, though the pacing could be stepped up a little at times.

Show opener Thomas Worrell, who performs with great flexibility inside and around a suspended hoop set the tone for the quality of this cabaret show.
Highlights include “Rolla Bolla” by the hunky Gediminas Pavlovicius, an award winning act that features Pavlovicius perched precariously atop seven cylinders moving independently, and “Duo Trapeze,” by identical twin sister Ruslana and Taisiia Bazalii suspended three meters above the stage. On opening night one of the sisters fell and though she was unharmed and recovered immediately, it was a reminder of the real dangers associated with the performance pushed to the limits.

The show is loosely themed around three colors, while the pure angelic white and the fiery red themes match the performances well, the black theme was less clear, and the very sensual Pas de Deux by acrobats Anne-Marie Godin and Diego Rodarte Amor would have fitted better under the passionate red theme.
Producers promised an intimate experience and they did deliver, especially for those lucky enough to sit on the stage or close to it. Punters sitting close by and who do not like the limelight will never rest easy though as there are several audience-participation spots. On the opening night, the clownish ringmaster Salvador Salangsang successfully sought out fresh victims who could join him to humorous effect in the links between acts that continue throughout the show.