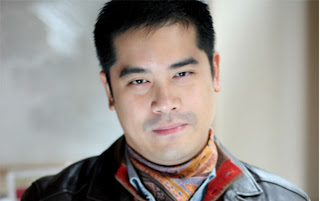 The New York-based Indonesian director Ed Sylvanus Iskandar was nominated for a 2012 Drama Desk Award for his direction of Sean Graney's These Seven Sicknesses at The Flea, setting him in the same league as fellow nominees Jo Bonney, David Cromer, Sam Mendes, Mike Nichols, and Tony Speciale. He missed out on the award to Mike Nichols, but has been in demand ever since. ARTINFO talked to the director about his latest work, the staging of David Ives’ "Venus in Fur" at the Singapore Repertory Theatre, as well as his busy New York schedule for the rest of the year.

What attracted you to Venus in Fur?

It was actually proposed to me by Gaurav (Kripalani, the director of the Singapore Repertory Theatre), and we had been looking for an opportunity to collaborate for close to two years. One of the reasons why the play is so interesting is that it has this incredible risqué feel, the subject matter, the way the characters connect to each other, yet clearly it’s connected with a mainstream audience. And I was really fascinated in a way, and I think it’s because we connect very much in this power struggle, this war of the sexes that is really at the heart of the play. A lot of the rhetoric of the play is as violent as anything you will find in Strindberg’s Miss Julie, or any number of those turn-of-the-century, late 1800s, classics that document the fight between men and women for their place in society. And of course the play is based on an 1870 novella “Venus in Fur” by Leopold von Sacher-Masoch. So, when Gaurav proposed to mount this play in Singapore, it immediately caught my attention, simply because I feel that a lot of those issues are absolutely still very present in this society here, and it’s something I’m familiar with because I have family living here and I’ve been in and out of this country for a long time.

How do you approach the staging of such risqué play for what is a more conservative environment here?

It’s actually really playing to the play’s benefit. Yes, there are a lot of risqué moments and it’s obviously based on a piece of erotic literature, there is no hiding the fact that there are scripted moments in which the actress almost takes all her clothes off on stage, it’s kind of intended for that shock-effect. But on some level, I feel like the audience in New York has pretty much been already desensitized to all of these tactics so the play had to work harder to be more shocking whereas here the tension is just palpable, and the shock and the actual tuning-in the audience does to the piece has completely transformed the way that it is in dialog, and I think that’s thrilling. Certainly, the actors think it’s the most exciting energy ever.

I don’t think anything we do on stage is beyond the bounds of taste. You have to create an effect in such a way that any kind of nudity or profanity are meaningful, it’s not being used randomly. So the challenge is to make sure that the action on stage is rooted in power play, and not in a desire to display flesh. Everything that you bare or conceal is for the effect of controlling another person or to find a way of catching them off guard. If you look at the tracking of how pieces of clothing come on and off, it’s a really fascinating, very accurate, and thorough documentation of the actual status battle between men and women.

How does your direction differ from the original’s?

The play treads a really fine line between naturalism and a heightened theatricality. In New York, the production was totally focused on establishing the naturalism and to me, what is glorious about the piece, and what a culture in Singapore more readily accepts actually, is the appearance of the divine within the play and I won’t elaborate further on that, as it would spoil what the play is doing for anybody going. But I created a world on stage that was a little bit looser, in allowing the room itself to transform into a space that was a bit more heightened and not just a literal loft in Brooklyn, and with that it allowed me to employ more operatic devices in the actual scenic work in the play itself. Because the world around the actors was a little bit more heightened, it also allowed me to approach an acting style that was similar, so we weren’t completely confined to treating this as a 100% realistic play.

You founded your theater company, Exit, Pursued by a Bear (EPbB) in 2010, which you’ve described as “a creative gym for emerging artists and a unique home theater experience for invited guests,” can you expand on what you mean by this?

It’s about creating a culture of community around theater going which I though was missing. To me, the point of going to the theater is not just about talking with the person you went with, but also getting to know the actor that created the piece for you. The fundamental purpose is to allow artists to practice their craft throughout the year. At the same time, because we’re not interested in creating pieces with a lot of crazy sets or costume, we had to find a way to offer an experience that’s a bit more personal, a bit more connected to the audience, so the culture really is that you’re invited to a home, which is pop-up; you must be on the list and you’re given the address the day before, you may be given a password and then you enter a party, essentially. There are cocktails served by the actors, you’re invited to sit and watch half a play, you’re then served a home-made dinner and then you see the rest of the play and then it turns into a late night lounge. The audience never pays because we feel we’re sharing a work in progress.

What are you working on now?

I just completed the EPbB’s latest lab Greater Angels, and the next play will be The Golden Dragon by Roland Schimmelpfennig, which will be produced by The Play Company at The New Ohio Theater in May. After that I will be directing Tennis in Nablus by a brilliant emerging playwright Ismail Khalidi for The Culture Project in June-July. The play is a gorgeous piece essentially about the conflict between Palestinian, Jews, Arabs, and the colonial Brits within a very specific period of time. It’s a piece about colonialism both emotionally and literally. Then after that, there will be a series of workshops over the summer, including Gabriel Jason Dean's new play Bacha Bazi. It’s about a documentary filmmaker who wants to expose the cultural practice of bacha bazi (boy play), an ancient Afghan tradition where young boys dance in women’s clothing and are sold for sex to the highest bidder. It explores the consequences of intercultural misunderstanding. It’s a challenging play, not just because of the subject matter, but because it employs a lot of dance and music as well as Dari (modern Persian dialect). About a third of the play is in Afghan language, though it’s written in such a way that you will understand what is being said. It’s been optioned by Ken Davenport, a Broadway producer, so we could bring it to the stage in 2014. And then we’re also thinking about doing a commercial transfer of Restoration Comedy, which had a run at The Flea that was very well received last year, but this is still in discussion and not yet confirmed.

Is it normal for a New York director to be that busy?

I would like to say, it is, but it isn’t. I’m very lucky that These Seven Sicknesses was nominated for the Drama Desk. It was so much out of the field; it was my first professional play in New York and I couldn’t believe I was included along Mike Nichols and Sam Mendes. It opened so much interest in my productions, a lot of playwrights came to see it, along with artistic directors and a lot of those conversations are now manifesting. It was a moment of both luck and the right project. I want to be that busy and I’m aggressively pursuing these relationship and propositions. It’s hard work because you have to take care of everybody the right way. On some level, I am lucky I come from a polygamist culture; just two generation ago my grandfather had concubines and you need to treat them the same way.

As first published on sea.artinfo.com