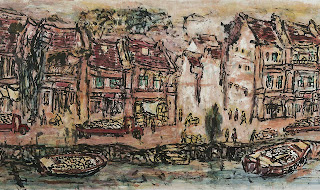 Singaporean property developer and art collector Daniel Teo has over the years bought works by many artists, ranging from Chua Ek Kay and Jimmy Ong to Robert Rauschenberg, Frank Stella and Roy Lichtenstein. But the works by Singaporean artist Lim Tze Peng are very close to his heart. Over the years he has collected 27 works by the now 90-year-old artist, ranging from
Lim’s Bali series to his street scene of Singapore and his still lifes.

In 2010, Teo founded The Private Museum to provide a space for art collectors to showcase their collections in a curated display, as well as offering a platform for artists to push boundaries in the expressions of various art forms. It is here that the avid collector recently opened “Lim Tze Peng: A Private Collection,” which presents 16 of the works by Lim in his collection
Born in Singapore in 1923, Lim was exposed to Chinese calligraphy at a young age and once recalled he spent, “decades” perfecting it. Although not formally trained, he gradually developed a strong proficiency in oil and ink painting and participated actively in artists’ field trips around the Southeast Asian region in the 1960s joining with other Singapore artists such as Cheong Soo Peng.
The distinctive Nanyang Style of the 1950, which combined western-style oil painting and with traditional local subjects, is apparent in Lim’s early Chinese ink paintings.
Lim is best known for the significant number of Chinese ink drawings and paintings of Chinatown and the Singapore River he produced during the early 1980s when urban redevelopment was focused on these two areas.
His recent work exhibits bolder brushwork, a marked development from his earlier, intricate, Bali Series and Still Life Series, partly a reflection of his failing eye-sight.
Teo remembers first encountering Lim’s works when he received a calligraphy from him as token of appreciation at a function. “It started my fascination with his works and the beginning of my long friendship with him,” Teo recalls.
“I like how his spirit and approach to life are manifested in his perusing his art. I was very taken with and in awe when I watched him at work — his strong bold strokes just flow with the invisible yet powerful ‘qi’ in such a magnificent way resulting in a beautiful sight of expressive movement,” he adds.
The highlights of the modest exhibition are some of the more recent works including a large-scale painting of the Singapore River spanning more than 3 meters wide, as well as three black & white Chinese ink streetscapes and landscapes.
The exhibition also showcases an oil painting which was a gift from Lim to the Teo family, underlining the special relationship shared between the collector and the artist.
Teo says he has many favorites. “Some of the ones that come to mind are the Street Scene Series, the Bali Series, and Tree. All of which are featured in this exhibition,” he says.
“Of course, I deeply appreciate ‘House on Upper East Coast Road,’ which was the gift from Tze Peng to me. An interesting story about this piece: Lim and I share the same passion of old, historic buildings. This building was scheduled to be demolished for construction of a new project. When Lim heard about that, he immediately went to the site and started sketching. He then painted it and presented it to my family and I as a gift,” Teo explains.
To see some of the paintings on display click on this ARTINFO's slideshow