DSL Collection Reaches Out to Audiences with Latest Technologies 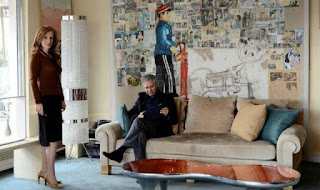 While some collectors choose to build a private museum to display their collection, Dominique and Sylvain Levy have taken a different tack; they are trying to reach as many people as possible by using the latest technologies to share their collection.

When the French couple started to collect artworks more than 25 years ago, their initial focus was on Western contemporary artists such as Robert Rauschenberg, Manolo Valdes, and Antoni Tapies, before moving on to contemporary design, amassing an impressive collection, ranging from Ron Arad, to Marc Newson, Ronan, and Erwan Bouroullec. Then in 2005, during a trip to Shanghai, they visited the studio of Ding Yi and fell in love with his work.

Their first Chinese contemporary art purchase on that visit started a collection, now known as the DSL Collection for the couple’s initial, which has grown to about 180 artworks that include pieces by artists such Ai Weiwei, Zeng Fanzhi, Lu Hao, Sun Lei, and Tie Xing.

But while agreeing to regularly lend some of their pieces to museums and art spaces for exhibitions, the Paris-based couple decided early on to make their entire collection available on the Internet, creating a virtual museum that visitors can stroll through via thematic routes, with temporary and permanent exhibitions curated by guest curators.

“When we decided to share the collection with other people we thought of all the different ways to connect with them. There are different types of audience, young and old persons, Chinese or western, art lovers or just curious people. For every type of audience you need to find the right message and the right tool to reach it,” Sylvain Levy explained in an interview.

In 2012, an iPad application to see the DSL Collection was made available and the couple has been pro-activly promoting the collection on social networks. “All this is part of our wish to create a strong cultural identity,” Levy said, adding the social media approach allows the collection to reach a younger generation of art lovers which is well-versed in using the technology every day.

Last year, the couple organized "Press Play: New Perspectives in Contemporary Chinese Art" at the art space Momemtum in Berlin, which showcased six video works from their collection along with a short 3-D computer-generated film of a virtual exhibition curated by Martina Koppel Yang and “set” in the Grand Palais, Paris.

The couple’s latest project, still in its infancy, is to start documenting exhibitions around the world (mainly exhibitions of installation works) in 3-D and then showcase the short films at small art spaces around the world. “We just bought a 3-D Camera, which is currently in Beijing and we're experimenting with it," Sylvain Levy explained, "We've shot some exhibitions at Ullens Center for Contemporary Art (Beijing) and we're trying to edit it to create a short film that could then be presented internationally.”

"While a 3-D film cannot replace the experience of seeing the real work yourself, not everybody can afford to go around the world to catch an exhibition. Of course, it's much better to see it in person, but for those who can't, seeing a 3-D film is an option, especially now that we're making so much progress with this technology," added Dominique Levy, noting that in some blockbuster exhibitions the crowds can be so dense around the artworks that you might not see them properly even when going in person.

They hope to be ready to show their first film at Art Miami at the end of this year. "We're still at a very early stage right now," he added.


As first published on SEA.ARTINFO.COM