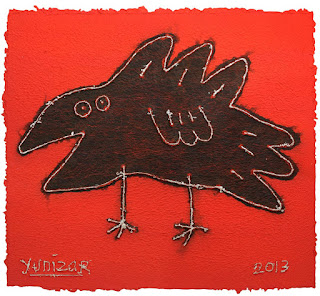 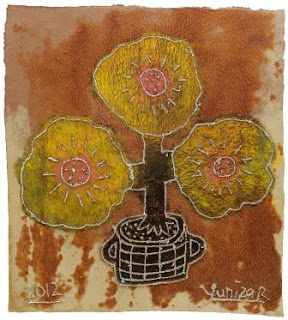 The Yogya Art Lab was co-founded in April 2012 by Yunizar, Richard Hungerford, the former head of print-making at the Singapore Tyler Print Institute, andJasdeep Sandhu, owner of Gajah Gallery, and also its first artistic collaboration was with Yunizar itself, the Lab was set up to reach out to all artists based in Indonesia.

It is currently working on the production of sculptures with Ashley Bickerton that are planned to be showcased at Art13 London in March, and Indonesian artist Handiwirmanis also slated to start a project by the end of January.

Based in the artistic enclave of Bantul, an area of Yogyajakarta, a Javanese town that is regarded as a center of the Indonesian art world and a key cultural center, and the Lab aims to capitalize on this position to bring together highly skilled and innovative artisans and artists to explore new creative horizons.

Headed by Hungerford, the team consists of ten local artisans and the Lab recently acquired its own foundry.

“The aim of the Art Lab is to bring the production process closer to the artists’ needs. We find that most of the time artists are cut out from the manufacturing process of 3D work and we hope that the Lab will help the artists push their normal boundaries,” Sandhu told ARTINFO, adding the Lab plans to concentrate on 3D project management, which will include paper and sculpture.

“We select and invite artists to work with us. But then, there is really no time pressure,” he added, pointing out as an example of this that Yunizar worked for four months on his new project that includes six pieces made of bamboo and banana leaf paper coated with a natural resin.

The creation of Yunizar’s works utilized experimental production methods and new material and textural combinations, including molten-metal, thick paper (made by hand at YAL by Hungerford), as well as colors created with local materials, including dyes more commonly used in batik production.

In the process of creating these works, Yunizar laid hot metal onto the thick pieces of hand-made natural paper, manipulating the fibers during the drying process, synthesizing the simple depictions of his everyday life in Indonesia with new elemental properties and visual textures. The result is a series of multi-textural works, two of which will be presented at Art Stage Singapore.

AS first published on ARTINFO.COM