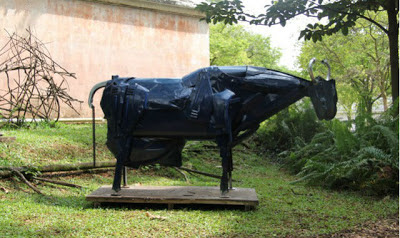 The squirrels and birds of Fort Canning Park have recently welcomed a few new residents. Four large cow sculptures by Singapore-based artist P. Gnana have taken residence at the foothills of the historic park until the end of March as part of a small outdoor exhibition supported by theNational Parks Board (Singapore). 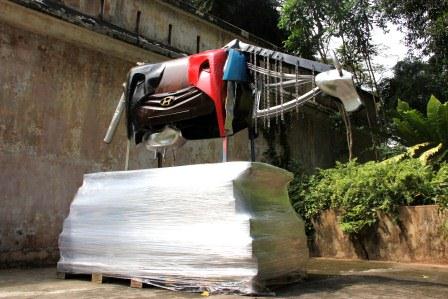 The sculptures, part of the aptly named “Incarnation Series,” are made from reclaimed materials such as car parts, bike parts, and other scrap material that the artist has combined with solid bronze and antique vessels without physically altering them.

"Usually, I have ideas first before looking for suitable materials. For example, you have an idea that you will use a certain material for the body of your sculpture but after sourcing for the materials, sometimes the idea changes and you use it on other parts instead. The ideas are not fixed. Many amazing things happen on the spur of the moment. I chose to use a combination of new and old materials with completely different tones to create a fresh visual language and to give my sculptures a more expressive elucidating statement for the viewers,” the artist explained.

The series showcases P. Gnana’s fascination with the cow, a main subject for his oil paintings which remind him of his childhood in India, and which he sees as a versatile visual symbol.

'Incarnation: Larger-than-life Sculptures of the Cow by P. Gnana' will be on show at The Foothills Fort Canning Park until Mar 2013

As first published on SEA.ARTINFO.COM