An Interview with Marc Quinn @ Gardens By The Bay 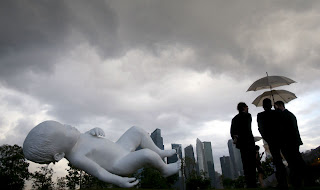 Marc Quinn was in Singapore to  unveil his 2008 sculpture "Planet" — a seven tone, 10-meter-long bronze sculpture of his infant son — at the Gardens by the Bay

Donated by Mr. and Mrs. Putra Masagung, the sculpture, one of an edition of three, will be a permanent display in the meadow area of the new public garden. He talked to ARTINFO.COM about his latest works and current project: 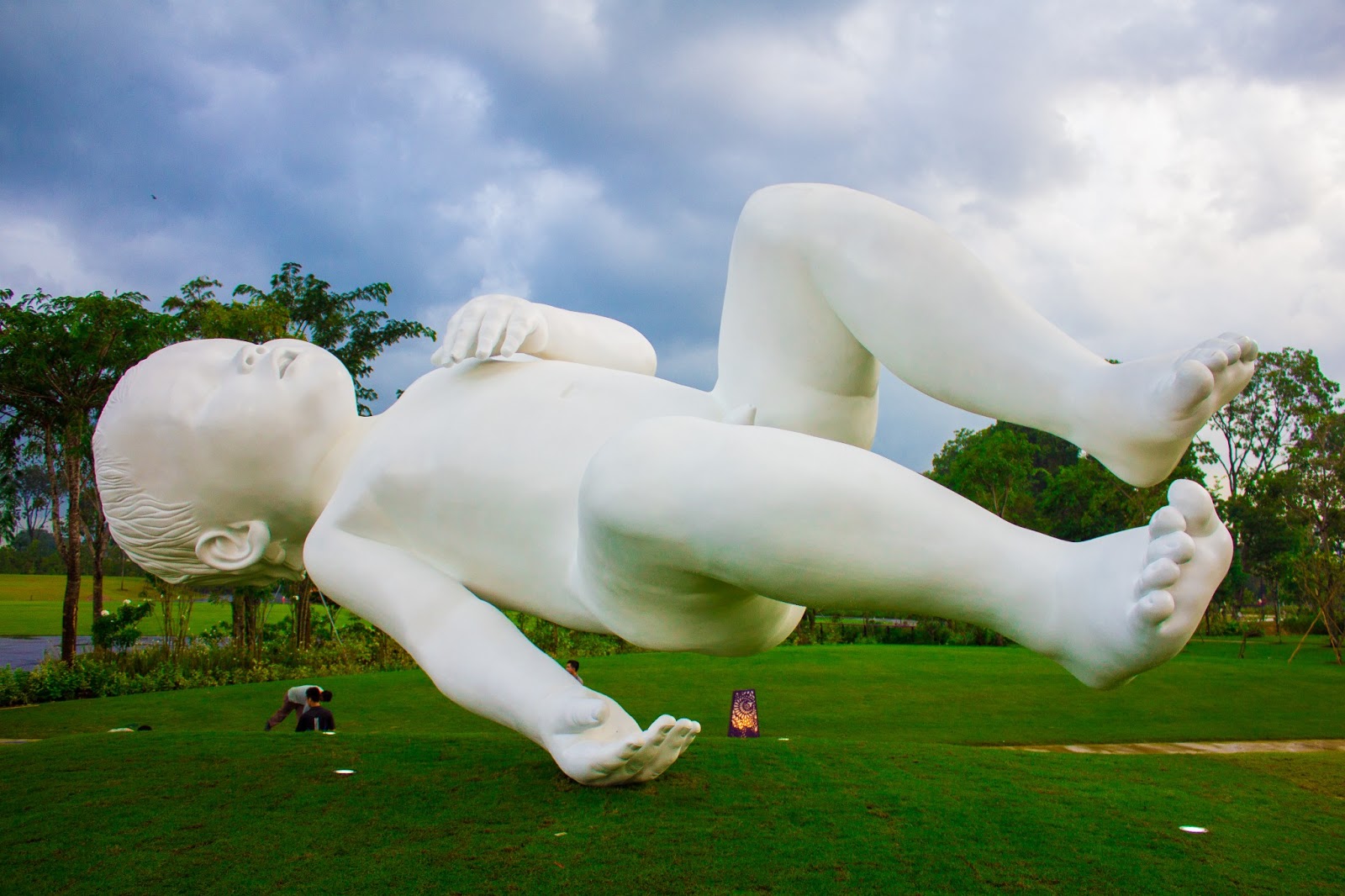 This sculpture was first exhibited in the Beyond Limits exhibition at Chatsworth House in 2008. Are you happy about its new location?
This piece is about the environment, nature, our relationship to it. So I think it’s a perfect location.
What is it about?
It’s a paradox, an inversion of our relationship to our planet. It makes you realize that something big, like our planet, is vulnerable as well, and kind of precious. But it’s a piece of art, it’s not a manifesto and it shouldn’t have a particular answer, it should have a lot of different interpretations, because art that lasts is art that is ambiguous. It’s poetry not prose.
It’s hugely heavy, but seems to float in the air with just one hand gently touching the grass. What’s the secret?
It has a huge steel structure within the bronze and huge foundation underground. It’s engineering. It’s nice to dematerialize things. It’s made of bronze which is a traditional material for a sculpture, but because it’s white and floating it feels like it could be a balloon.
Last year you started a new series, The Origin of The World. What can you tell me about it?
In a way it’s about a kind of archeology of art. The conch shell is a beautiful sculpture made by a tiny brainless animal that live in it. So in a way, it’s about the inherent need of nature to create beautiful things, and how beauty and function goes together. I also like the fact that when you look at the shell it has rings like a tree, so there is an element of time. There is a sense of the past, yet the surface, which is made of polished bronze, is always in the present, because it’s reflecting all around it. So in a way, it’s a sculpture of time, you have the present and the past. Also there is this idea that we’ve evolved from creatures from the sea, so it’s going back to the origins of creation.
Are you continuing this series now?
Yes, I’m having a show at the Fondazion Giorgio Cini in Venice this May and I’ll be showing several pieces, six or eight.
What else are you working on this year?
Something in Malaga and something in Istanbul; but I don’t know yet what I’ll be doing.
You seems to have also gone in a new direction in your painting recently, splashing paint?
For me, they’re quite interesting, because again it’s about materializing and dematerializing. The splashes are the same colors used to paint the painting. So they exist in two ways at the same time: one is material, an abstraction, and then secondly as image. So it’s almost about how paint goes from matter and transforms into an image. When it’s an image you don’t think about the paint, and when it’s the paint, the matter, you don’t think about the image. So it’s almost like a process of magic happening in front of your eyes, and here you have both steps of process: paint existing as material and in its dematerialized form.
You also last year started to introduce a human element in your flower paintings, is that a new direction?
I did a series with Lara Stone, a British model. It’s a similar thing. With human it’s similar to flower. All living things come and die. A flower is beautiful and then it wilts, a girl is beautiful and then… It’s a classic theme of art, but in a way, it’s all about how we’re all linked up to nature and creation, I supposed.
Describe a typical day in your life as an artist
There isn't really a typical day in what I do but I always get to my studio by 10 and leave around 6 or later. But the great thing, and the whole point about a studio, is that it's a place where anything can happen.
What's the most indispensable item in your studio?
Definitely my computer!
Where are you finding ideas for your work these days?
Everywhere! Literally, everywhere.
What's the last show that you saw?
Exhibition of Armor at the Wallace Collection.
What's the last show that surprised you?
Lucien Freud at the National Portrait Gallery, because everything you thought you knew about the pictures, from reproductions, was actually everything that was irrelevant to their artistic quality. In other words, everything that was really good about them you cannot reproduce in photographs. It is so easy to forget that in the age of endless reproduction.
What's the weirdest thing you ever saw happen in a museum or gallery?
A Japanese tourist fainting in front of “Self” at the Sensation show at the Royal Academy in London, 1997.
To read the full interview go to ARTINFO