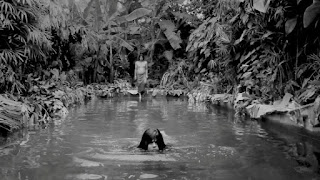 Artist Jimmy Ong is primarily known for his large-scale, charcoal figurative works, but for his second solo exhibition at Tyler Rollins Fine Art the US-based Singaporean artist will, for the first time, present video works.
Earlier this year Ong worked on a series of projects in Yogyakarta, one of the key artistic centers of Indonesia, where he undertook a study of gender roles as reflected in folklore as well as contemporary society, the latter specifically relating to the local transgender community.

His “Elo Progo” exhibition takes its name and inspiration from the confluence of the Elo and Progo rivers – one said to be male, the other female – located in the Kedu Plain near Borobudur, one of Java’s sacred places. Ong was captivated by the local myth surrounding the gendered rivers as well as the traditional Javanese practice of meditation in water.

The exhibition will also include a new body of works on paper. Done in richly colored gouache, they appropriate a type of Chinese splash ink brushwork in mirrored patterns created by the repetitive folding of the paper along an axis.