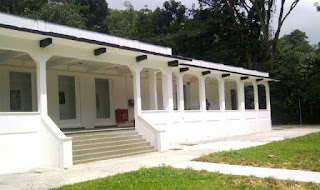 Gillman Barracks, the recently launched cluster of art galleries in Singapore, is getting a new tenant on Jan 18 with the opening of ARNDT Singapore, an offshoot of the well-known German gallery ARNDT Berlin.


ARNDT is no stranger to Southeast Asian art as it has held exhibitions in Berlin for Thai artist Natee Utarit and Indonesian artist Eko Nugroho. Gallery owner Matthias Arndtsays this year he plans to hold at ARNDT Berlin an exhibition of 16 major Indonesian Artists, accompanied by a publication about the past 2 decades of contemporary art in Indonesia in May, a solo exhibition with Indonesian artist Agus Suwage in July and a solo exhibition with Filipino artist Geraldine Xavier toward the end of the year. Meanwhile in Singapore, Arndt is envisioning the new space more for project use. “I will not be doing shows every 3-4 weeks just to put something for sale on the walls. This is not in that sense a traditional gallery space,” he said, explaining that the venue will put on some long-term exhibitions, but will also act as ARNDT’s Asian office and viewing room. “Besides the exhibitions, ARNDT Singapore will focus on artists management and art advisory services for private and corporate collections in Asia,” he told ARTINFO.

In the last couple of years, ARNDT has favored staging pop up exhibitions in unconventional spaces (Hong Kong, Melbourne, Sydney) rather than opening new gallery spaces.

The gallery will open its doors with a show titled“Otto Piene, Heinz Mack and ZERO: Light & Reflection,” that will also include works by Lucio Fontana and Yves Klein.

The ZERO Group was founded by Piene, Mack, and Günther Uecker in 1958, with the goal of revolutionizing post-war art, leaving received principles of art behind, concentrating more on light and movement was the central point of their practice. By the time ZERO disbanded in 1966, the group had collaborated with a wide range of artists – such as Fontana, Klein, Piero Manzoni, Jean Tinguely, and Yayoi Kusama. After more than half a century, the group is getting in April a major show at the Grand Palais in Paris, and there are other long-term plans for exhibitions at Solomon R. Guggenheim Museum in New York City and Stedelijk Museum in Amsterdam.

AS FIRST PUBLISHED ON ARTINFO.COM