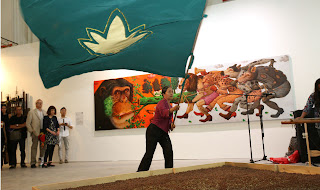 Art Stage Singapore opened its doors to a large number of VIP guests this afternoon, creating a positive buzz. Internationally-acclaimed artists like Hiroshi Sugimoto, Wim Delvoye,Marc Quinn, Philippe Pasqua, and Takashi Murakami could be spotted walking around, along with many lesser-known artists including quite a number from Indonesia. There were also established collectors like Uli Sigg, Budi Tek, Dominique and Sylvain Levy, and Lekha Poddar.

“I’m surprised to bump into so many people I know. I’ve been here for 30 minutes and haven’t made 50 meters. There are many collectors from France, Europe, and the US.”

“It’s buzzing, especially for South East Asian art, which for me is very positive. I see the fair getting more of a regional identity; that makes it stand out and distinguishes it from Hong Kong. I also think having performance is a good idea, it’s what the region does, it’s non-commercial, and it gives the fair an edge.”

“I have to say the attendance on opening night far surpasses what we saw previously, and this has to be taken as an encouraging sign.”

“This is the third time I'm taking part and the quality of the exhibitors and the artworks have just gone up and up over the years. The quality of the collectors has also improved. I saw a good mix of Asian and Western collectors.”

“I thought it was a bit lacklustre at first but improved a bit later as the crowd grew. I thought the Indonesia pavilion was a bad idea and I missed the Indonesian galleries presence. I loved the Chen Wen Hsi show which was relegated to the back alley and Melati Suryodarmo’s performance. But I only covered half the fair today.”

“I don’t like the layout. It’s more closed-up than last year and it’s harder to navigate. I feel I’m more going into cubicles than an open space. I also miss the commissioned works they had at the entrance last year.”