A comprehensive exhibition on Buddhist art in Thailand across 1,500 years explores the many unique styles that developed in the making of Buddha images and other decorative ritual objects as a result of Thailand’s unique blend of religions and beliefs.

“Enlightened Ways: The Many Streams of Buddhist Art in Thailand,” now showing at the Asian Civilisations Museum (ACM) in Singapore, presents over 100 artifacts drawn from 11 of Thailand’s museums, as well as items from the ACM’s own collection. It underlines the wide range of styles seen through sculptures, furniture, jewelry, paintings, manuscripts, and ceramics.

On display is a highlight from the ACM’s collection — a 31-meter long brightly decorated scroll that recounts the story of the Buddha’s past life as Prince Vessantara. Because of its length, the museum displays only 10m of the scroll, while the rest can be viewed on a computer screen.
Another highlight of the exhibition is an intricately carved 16th-century bronze sculpture of Buddha seated in meditation while the huge armies of his enemy Mara are advancing.

“This exhibition is a step towards appreciating the many ways in which Thai artists and patrons have worked ceaselessly to express what is most meaningful to them about the Buddha’s life and teachings,” says Heidi Tan, principal curator at the ACM and curator of the exhibition. “We hope that visitors will gain a better understanding of the many cultures that helped shape Thai Buddhist art over the ages.”The exhibition takes a look at two major themes that are still important to religion and culture in Thailand today: Brahmanism and merit. 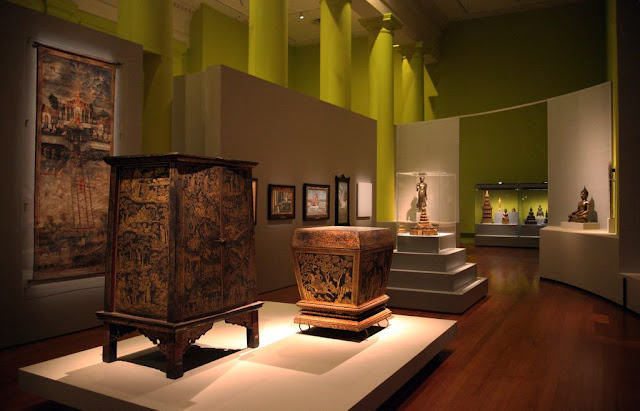 Influences from Brahmanism, the early form of Hinduism, can still be seen, and Ganesha the elephant-headed god remains one of the most popular deities in Thailand. Another important concept of Thai Buddhism is the accumulation of merit, which can contribute to one’s future and pave the way to enlightenment. Making merit through art has taken many different forms through the ages, from the creation of Buddha images and clay tablets, to textile furnishings and amulets.

Concurrent to this exhibition, “Exploring the Cosmos: The Stupa as a Buddhist Symbol” provides another perspective of Thai art through the stupa — the principal architectural form of Buddhism found across Asia. Featuring 29 works from the ACM’s collection, covering a period from the third to the 19th century, as well as a hanging mobile stupa by the young Thai artist Jakkai Siributr, this exhibition will be on display until 18 August 2013.


The exhibition Enlightened Ways: The Many Streams of Buddhist Art in Thailand runs until April 17 at the Asian Civilisations Museum.