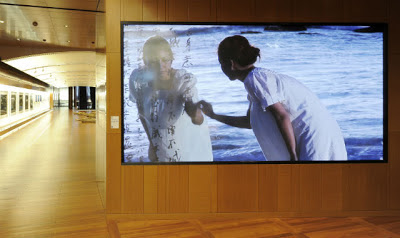 “Dedication to the Sea,” is a new exhibition by young upcoming Taiwanese artist Tsai Charwai that explores the beauty and the dangers of the sea through video, sea related objects (seashells and driftwood) sculpture, and photographic works.

Befittingly, it is showcased at the Espace Louis Vuitton Singapore, a small glass island in Singapore’s Marina Bay, the exhibition reflects on the complex relationship between men and the sea, as well as evoking the world of travel which links to the luxury brand’s DNA.

Tsai has made a name for herself with her aesthetically pleasing calligraphy on unusual materials. Using the words of a seminal Buddhist text, the Heart Sutra which she memorized as a child, she has in turn tattooed an olive tree, a block of tofu (during the first Singapore Biennale 2006), lotus leaves, mushrooms, and bonsai plants. The sutra highlights the ephemeral nature of all phenomena as the only eternal condition, and her choice of materials, which often decay, reinforces this notion of transience and impermanence, a striking reminder that beauty does not last. 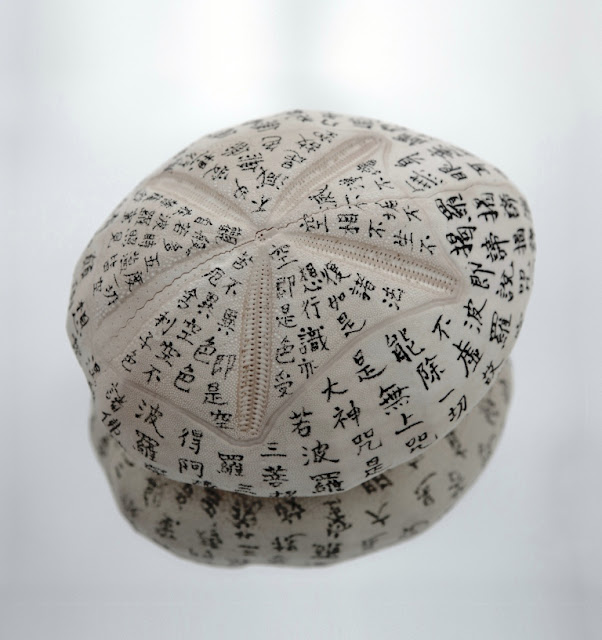 Here the artist continued her exploration of her Sutra Series with seashells and coral she obtained in Japan after the 2011 Tsunami (a reminder of the destructive power of the sea), as well as an earlier poetic video, Sea Sutra (2009), where she writes the words on a mirror that reflects the sea behind her as a way to physically reflect the changes and unpredictability of the sea.

The exhibition includes a set of photographs and videos created in collaboration with Tibetan director Tsering Tashi Gyalthang, on the island of Lanyu, or Orchid Island, off the southeastern coast of Taiwan. The works focus on the ritual dance of women from the Tao tribe to ensure the safe return of their men at sea. The photographs were taken under the moonlight and the artist later added her sutra writings to them.

“For me the interesting thing about this exhibition is that although Singapore is an island, we have little relationship to the sea that we once had. In urbanized cities, like Singapore, with all these tall buildings, this relationship between society and the sea has been lost,” explained curator Eugene Tan.

AS PUBLISHED FIRST ON ARTINFO.COM