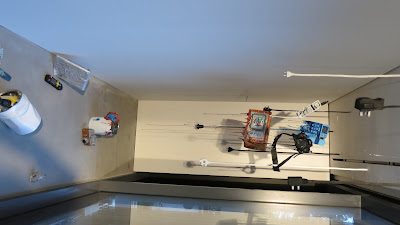 This site-specific installation at Third Floor — the non-commercial art space at Hermes — explores the unlikely relationship between technology and nostalgia, normally unlikely bedfellows. “I like to distort reality,” explained the artist at the opening.

Joo tells her story in new ways with what are now considered outdated methods such as stop motion animation throughout her video series. “Vaporised by Sunrise” depicts a frame by frame melting of crudely made Styrofoam objects resembling archaic versions of a microwave, television, dot matrix printer, and camera, inviting viewers to consider what is left in its material reduction.
In “Multi-Tiered Falls,” a dot-matrix printer hangs from the ceiling and prints a continuous cascade of paper with water images printed. A whirring sound adds to the effect of a waterfall. The free-standing sculpture of obsolete machine offers a bizarre fantasy of technology masquerading as life. “It’s a stop motion. I feel it’s like a film-making machine, but you have to slow down and be patient to appreciate it,” she explained.