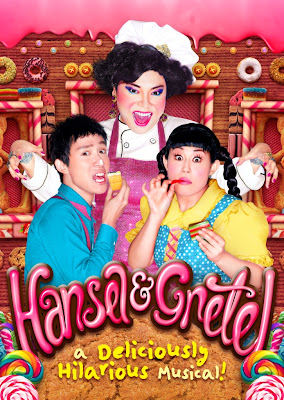 Pantomimes are musical-comedy theatrical productions traditionally performed around the Christmas festive season with audience participation, plenty of slapstick humor, cross-dressing, and topical references. Singapore theater company W!ld Rice has made it a tradition over the last eight years to present a pantomime version of a well-known fairy tale and this year it is the turn of Hansel & Gretel by the Brothers Grimm.


Unlike in the upcoming movie “Hansel & Gretel Witch Hunters,” to be released in January there are no dark twists in this pantomime version. Instead the company’s resident playwright Alfian Sa’at has concocted an entertaining local take with customary pot shots at establishment figures, events, and personalities. It will involve a pop “star” wannabe stepmother who thinks that the family budget is too tight to support the household, bickering siblings lost in the small local jungle, a yummy house built with local favorites with fences of fishball sticks, walls of kueh lapis (a traditional layered cake), and roof tiles made of kaya toast (a local breakfast delicacy), and a flamboyant witch mysteriously known as 'the Chef' who has a spunky, rapping assistant.

Helming this new production is well-known Singapore thespian Pam Oei. ARTINFO sat down with her to get the lowdown on the production.

Did you watch pantomimes when you were a kid?
Nope. There were none to watch in Singapore.

So when did you first see one?
When I watched Cinderel-lah! by Wild Rice in 2003. I had such a ball. I have vivid memories of the kids dressed as crabs, breaking out of their "tank" singing, “We Are The Free Sri Lankan Crabs”!

What are the key ingredients to a successful pantomime?
A well-loved fairy tale, cute kids, sharp humor, political and sexual innuendos which only the adults can understand, merry audience participation, catchy songs, and cross dressing!

Without revealing too much, what are some of the current themes this pantomime will be touching on?
We will have a preacher's wife, a parody of a national song that all kids in Singapore know very well, and Gangnam Style!

How difficult is it for an actor to let go and not be too over-controlling when she’s directing?
I try not to give my actors a line read, but sometimes I just can't help it! I've apologized to them in advance but they've said that they don't mind it. So yes, sometimes it is difficult. But I have good actors and that makes it easier, because good actors can take direction.

If you had to come up with your own gingerbread dream house what would it be made of?
Oooh. Chocolate cake, chocolate fudge, vanilla sponge cake, strawberry jam-filled donuts, Kueh Ubi, Kueh Dadar, Ondeh Ondeh, Kueh Lapis, Kueh Pisang, Jemput Jemput, Chendol and fresh, thick, creamy durian everywhere. Did I mention strawberry jam-filled donuts? Ok, actually I feel a bit ill thinking about all that now.

READ THE FULL INTERVIEW ON ARTINFO