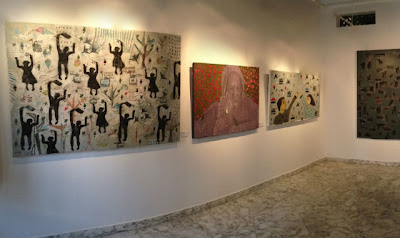 
"Kisses of an Enemy" at Sana Gallery offers visually powerful works that record the impact on society and individuals caused by recent political upheavals in the Middle East.

Maarouf highlights human rights issues in the Middle East, in particular the conditions of displaced populations. His works include paintings portraying concealed human figures and faces behind layers of longitudinal lines or trickled with tiny jasmine flowers as the artist intentionally blurs reality, “as if to say that we do not really see or that we cannot realistically convey the historical and almost always violent images that we are bombarded with daily in the news,” explained gallery founder Assaad W. Razzouk.

In a mixed-media piece entitled “Back to School,” Maarouf portrays a child hiding his head behind reddish sheet of paper which seem to have been puncture by bullet holes, while standing in front of a dilapidated structure. The greyish tone of the work makes it oppressive, yet a few, tiny flowers emerging from the ground also give a sense of hope.

Khawam speaks to the power of art to challenge sectarianism and limits on freedom of expression in the Middle East. In his paintings and stencil work the artist considers the consequences of current events in Syria with a technique that includes graffiti art. His paintings depict human figures destitute of any characteristics, shadowy beings. Children playing, holding flowers and jumping rope are shown blackened, their human features becoming just shadows.

Sana, named after the Arabic word for splendor, is located in a traditional shophouse on the outskirts of Singapore’s Chinatown district and was founded by Razzouk, a British-Lebanese entrepreneur specializing in sustainable energy projects.

"Kisses of an Enemy" runs until November 18, 12 Blair Road

AS FIRST PUBLISHED ON ARTINFO.COM