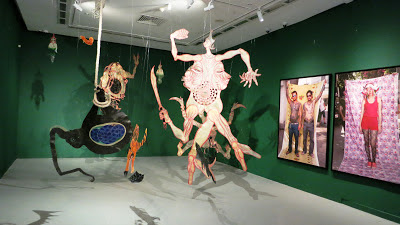 A comprehensive exhibition of Thai contemporary art has recently opened at the Singapore Art Museum, showcasing a multi-generational mix of artists.

With many of these artists hailing from various artistic centers in provinces away from the capital Bangkok, the presented works highlight the on-going links between contemporary and traditional arts and how Thai contemporary art very much reflects Thai society, heritage, and a strong connection with Buddhist faith.

Featuring over 50 works, “Thai Transience” explores themes of identity, impermanence, and spirituality in their various expressions, weaving contemporary artworks with a range of artifacts such as traditional statues, lacquer paintings, shadow puppets, and manuscripts on loan from museums and religious sites within Thailand, as well as from Singapore’s Asian Civilisations Museum.

“Thailand is producing some of the most exciting art in the region, and we felt it was time to have a comprehensive survey of Thai art at the museum,” said SAM director Tan Boon Hui.

Guest curator Professor Apinan Poshyananda, a leading Thai curator, writer, and arts administrator, said the exhibition’s theme of impermanence was chosen because it reflects the rather unpredictable nature of life in Thailand in recent years due to natural disaster and political differences.

While some of the artworks are reactions to the turmoil the country has faced in recent years, most are imbued with the influences of traditional crafts as well as Buddhism.

Siroj Phuangbhupha, a painter from Suphan Buri province, finds inspiration in traditional lacquer ware decoration that uses gold leaf on a black surface and represents scenes derived from mythological tales depicted in temple murals, but a close inspection of the works also reveal incongruous Western figures such as Mickey Mouse, Napoleon riding on a horse, and cherubs. “The use of this technique is quite traditional, but the content is very contemporary,” remarked Poshyananda. 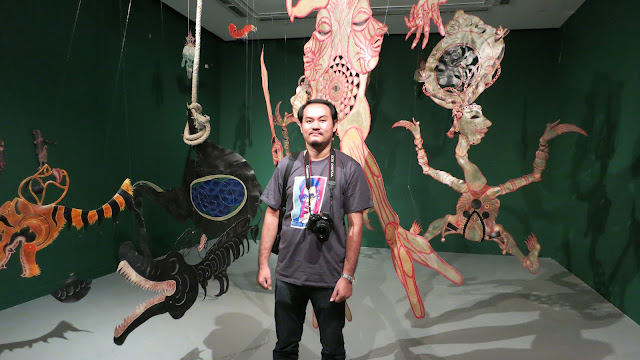 Chusak Srikhwan, an emerging performance and installation artist from Songkhla province, draws inspiration from one of his relatives, a shadow puppet master, to reinterpret the traditional Ramayana and Traibhumi epics putting them in a contemporary context. In “Free Form Avaricious is a Precious Blessing,” an installation of giant buffalo-skin shadow puppet figures, Sirkhwan references Thai consumerism excesses by showing a greedy elephant (a symbol for Thailand) lying upside down having died from drinking water from three different lakes. 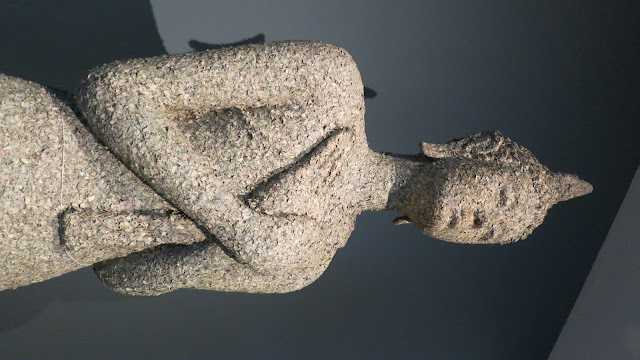 With “Lord Buddha said, ‘If you see Dhamma, you see me,’” prolific artist Kamin Lertchaiprasert creates papier-mâché Buddha statues out of shredded Thai banknotes, commenting on how some Thais may prefer to continue to act irresponsibly and then donate to temples in exchange for blessings and favors. 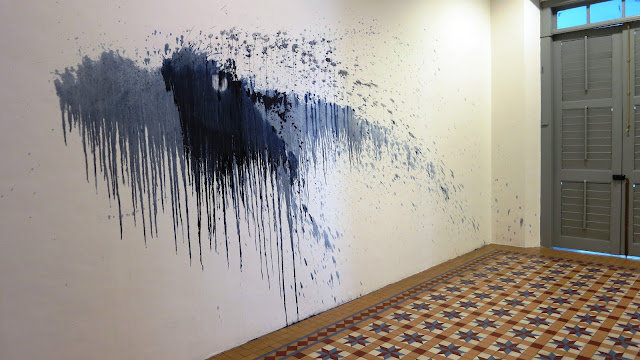 Perhaps the most symbolic pieces reflecting on the very transient theme of the exhibition is an untitled piece by Pratchaya Phinthong, a conceptual artist from Ubon Ratchathani who uses art as a form to critique issues that affect the environment, the economy, and society at large. His splashes of “magic” ink on museum walls (which for now is visible but which will gradually fade away) raises questions about what constitute art.

READ THE FULL STORY ON ARTINFO