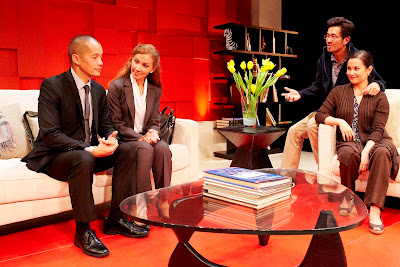 Filipina songbird and Broadway star Lea Salonga is currently appearing as Veronica in Yasmina Reza’s God of Carnage, a co-production between the Singapore Repertory Theatre and Atlantis Productions. The black comedy – that won Tony and Olivier Awards for Best Play - takes place in the aftermath of a playground fight between two schoolboys. What starts as a polite discussion between two set of parent, quickly degenerates into verbal warfare revealing underlying tensions and difficulties between each couple. ARTINFO’s Sonia Kolesnikov-Jessop caught up with the star to discuss her current role and her plans for 2013.

Most theatre goers would associate you with your musical roles, but you've actually already been in a few plays?
I started doing straight plays at almost the same time I started doing musicals, but obviously I've done more musicals. So far I think I’ve done probably five, including God of Carnage. The last one I did was Proof, about 10 years ago.

What do you like about straight plays?
I like the challenge of telling a story where my singing doesn't get into the picture.

What attracted you to this role?
Actually, I have to give credit to Bobby Garcia for asking me to be part of this show... it wasn't something I wasn't ever thinking of doing. He thought that I'd make a good Veronica, so he asked. And I said yes.

How would you describe your character Veronica?
She's a bit of a know-it-all and obsessive-compulsive, which makes her annoying and difficult to be around. She's someone who fancies herself a social crusader, by writing books on Africa, and being seemingly concerned with a world bigger than her own. It spills into everything else in her life. And that makes her even more annoying to her husband.

Do you relate to her?
I do have those tendencies too, but not to the degrees that the character does!

God of Carnage is described as a comedy of manners. There is nothing that funny in the dialogue, yet plenty of laughs in the audience?
Oh there is a lot that's funny in the dialogue, if you know what you're looking for. A sarcastic quip gets as much laughter (if not more so) as the physical comedy. And here in Singapore, the response is to the dialogue and delivery as much as to the more physical and visual aspects of the show.
It's very fulfilling.

This play has not satisfactory conclusion, don't you think there should be some closure?
In life, there isn't always closure, or it doesn't always take place in a neat little package, like on TV shows. It's great that there isn't one, allowing the audience to form their own, or wonder what happens a day, a few days, or a week after.
What's more difficult singing or speaking?
Singing for sure. There is a lot of prep work with singing that I don't need to do with just speaking.

You just appeared in the role of Kei Kimura in the world premiere of the new musical, Allegiance, with Start Trek start George Takei and Telly Leung, at the Old Globe Theater in San Diego. There are talks the show is going to move to Broadway in 2013. Can you tell me more about those plans?
Well, the plan is to bring it to Broadway... I'm hoping that it's all true, and that it happens next year. It's very exciting to think about!

How was "Allegiance" different as an experience from your previous musicals?
It's an original musical... I had only been part of one other before it, Miss Saigon. So the experience is similar, but the characters aren't. The process of creating the shows though is kind of the same.


Read the rest of the interview on ARTINFO