Published - At Home in the Garden The lush grounds of Singapore’s renowned Botanic Gardens have “sprouted” some extremely large flowers and trees. A poetic intertwining of human forms and nature, are being installed as part of Sotheby’s first exhibition in Asia of outdoor sculptures for sale, and they already look right at home amid the vegetation here. 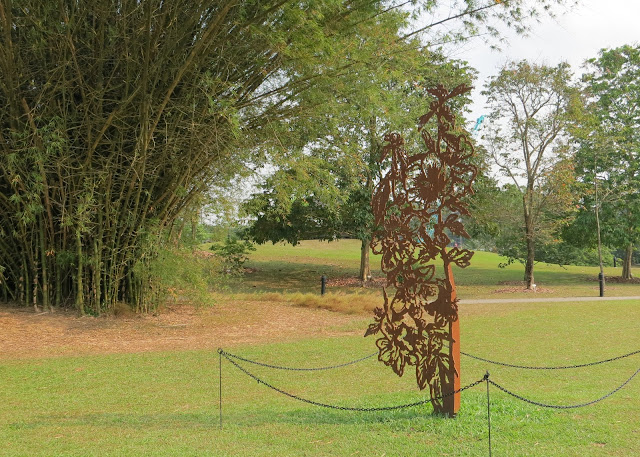 Sotheby’s has been staging exhibitions of monumental sculpture at Isleworth in Florida since 2003 and on the grounds of Chatsworth House in Derbyshire since 2006 but while these exhibitions have usually showcased a multitude of artists, only a few have been solo shows, such as the exhibition this year of Barry Flanagan’s work at Chatsworth.

“A solo exhibition tells more of a story, otherwise you have disconnected pieces that create impressions,” said Alexander Platon, Sotheby’s head of private sales in Europe, who organizes the Chatsworth sculpture exhibition every year and was in Singapore to oversee the installations 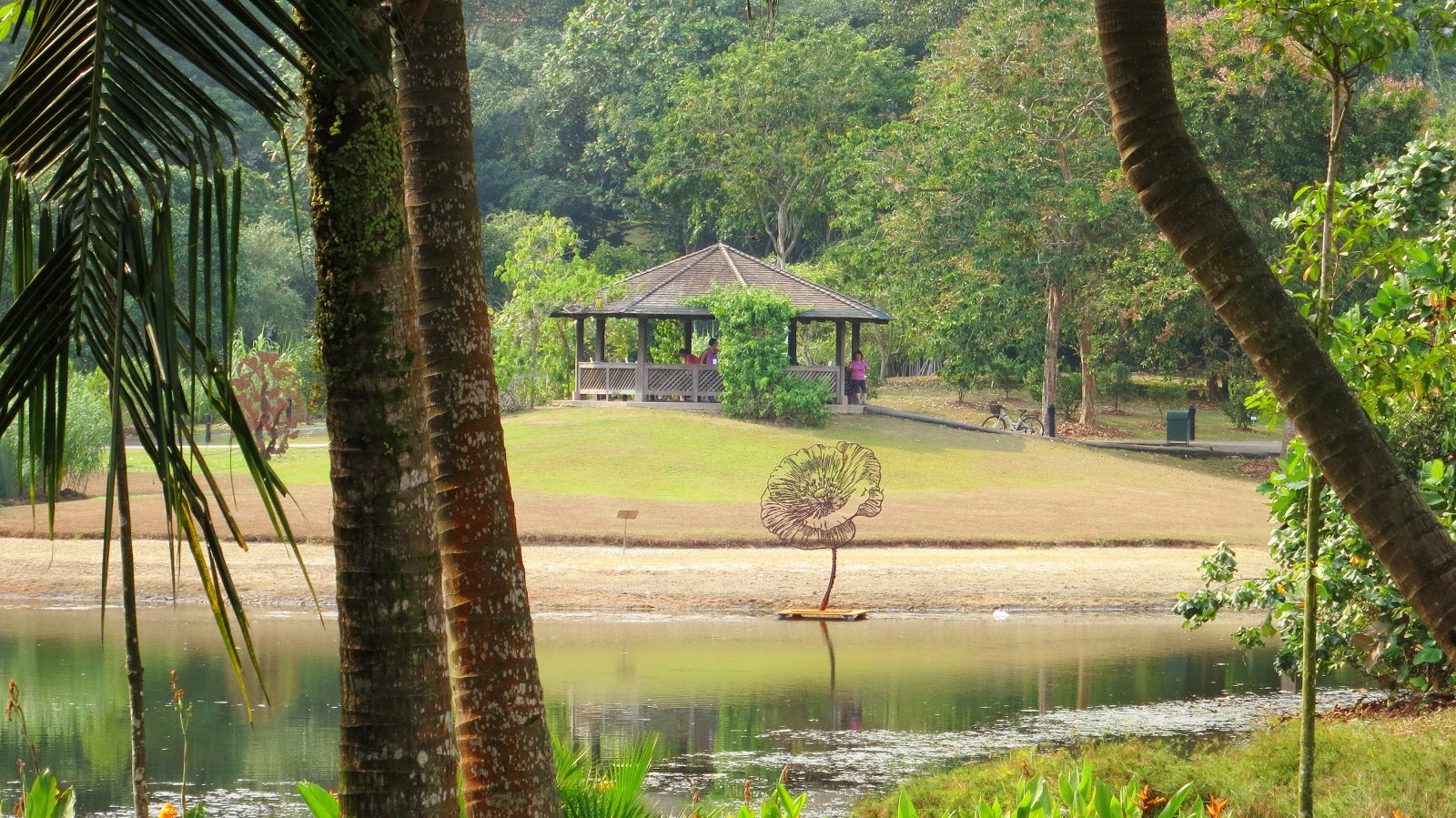 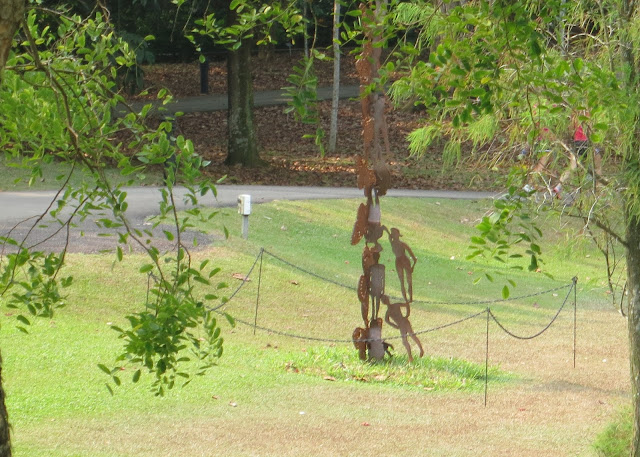 Mr. Ben-David already has a few of his large installations on display in Singapore, including one at the entrance to the Jacob Ballas Children’s Garden, which is part of the Singapore Botanic Gardens, and for this Singapore exhibition the London-based Yemeni sculptor has created 12 new site-specific sculptures to be displayed and offered for sale along with five more works.

Although the exhibition doesn’t officially open until the end of October, 15 of the 17 sculptures are already installed and can be seen now, though they will not have their final weathered look until closer to the opening.

“What I love about Zadok’s sculptures is that they have the ability to disappear and reappear in the landscape. You don’t get tired of them,” Mr. Platon said while walking around the garden, adding, “These pieces are perfectly integrated to the natural landscape and look like they could have been here for a long time. They make a statement, but they’re not overwhelming and I think that it’s important they don’t interrupt the natural beauty. They add to it, embellish it.” 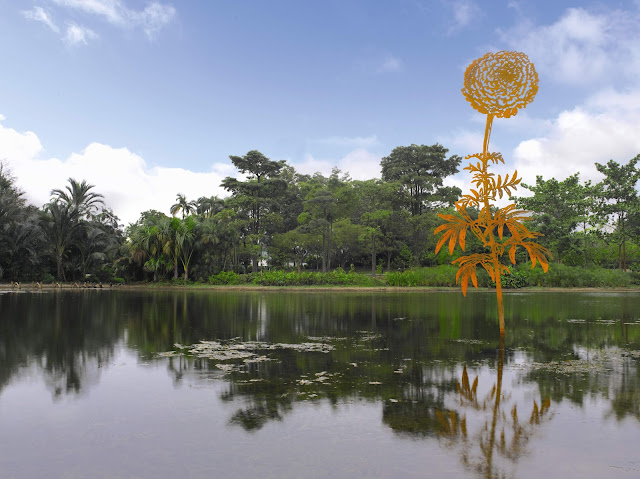 Mr. Platon said Sotheby’s selected Mr. Ben-David because his sculptures were already well-known in Asia: “We’ve had an amazing response for his works in the region. It’s an aesthetic that matches the Asian sensibility, and he is collected in the region and in Singapore, in particular.”

Born in the Yemen and educated in Israel, Mr. Ben-David has long been interested in the relationship between man and nature, recurring themes in his distinctive flat sculptures that are akin to drawings in the air.

He came to prominence in the early 1980s as part of the rising New British Sculpture movement, which was reacting against the minimal and conceptual art of the previous decade, seeking to return to the use of a wider range of fabrication techniques. But it was his participation at the Venice Biennale in 1988, representing Israel, that really established him internationally. 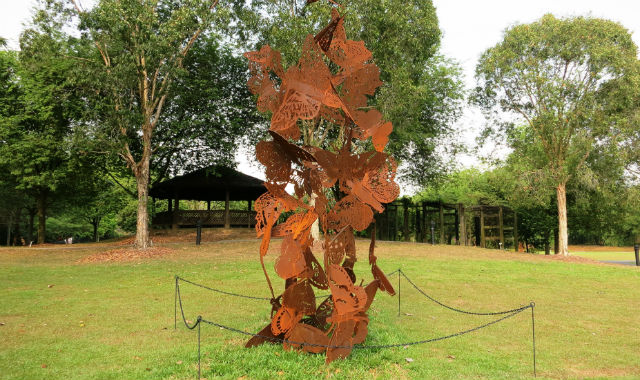 His creations are made of Corten steel, which rusts when exposed to the elements, forming a thin regenerating but protective coating. “This thin layer of rust is self-protecting the sculpture,” Mr. Platon said. “In fact the weather here is quite favorable for this, because the humidity is accelerating the process. I would think it will take about three weeks for the metal to attain its unified look.”

While most of Mr. Ben-David sculptures are flat cut-out silhouettes that would usually be best seen from one side, a couple of the sculptures of whirling butterflies with human bodies have a three-dimensional approach, that Mr. Platon said was more unusual.

But this installation builds on earlier works. Mr. Ben-David said in an email: “These butterflies are new and old at the same time. I made them the first time twenty years ago, as a private commission to the singer Peter Gabriel. They did have figures in the center as well, but their wings did not have the details that you can see in the current new pieces.

“The butterfly images for me are part of the broader metaphorical images of natural species that I have been using over the years. The animals, plants and insects are being used as metaphors for attitudes and behavior through ‘humanizing’ the nature.” He added that the human figures with butterfly wings were a metaphor to freedom.

The sculptures have been installed in the grass or integrated with trees in a newer part of the garden (which has fewer roots), and some of them are set in a lake. The few construction cranes adding more high-rise apartment blocks to the surrounding skyline are far from the stately backdrop provided by Chatsworth, but Mr. Platon said the cranes are “true to what’s going on” in Asia and in Singapore.

“These cranes are like the palm trees,” he said, “very specific Singaporean images, which I love. And it’s good to capture that, and I don’t think they clash with what we’re doing, at all.”


A version of this article appeared in print on October 23, 2012, in The International Herald Tribune.