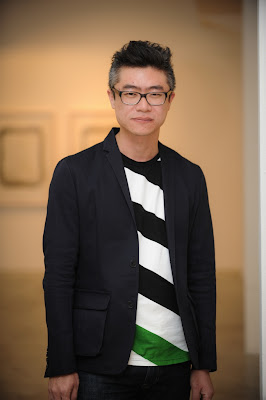 Current exhibition: Taking part in “Pilot Micro Multiplex│Mall” at the Sharjah Art Foundation in the UAE, an exhibition where several artist have transformed the site into a small shopping centre or micro mall.

You are presenting LEM1, a functioning bookshop that specializes in science fiction and fantasy. It’s a work that was first shown at Rossi & Rossi earlier this year, when you had your first solo show there. Tell us about the work?

Visitors are able to browse and purchase the books on offer, priced at £1 each, transforming the viewing experience into an exchange of goods and money. The title 'LEM' is a reference to the Polish philosopher and science fiction writer Stanislaw Lem. His seminal novel, 'Solaris', is regarded as a cornerstone of the sci-fi genre. In 'Solaris', a group of scientists probe and examine the oceanic surface of the planet Solaris from a hovering research station. The human scientists are, in turn, being studied by the sentient planet itself, which probes for and examines the thoughts of these human beings. Solaris has the ability to manifest their secret, guilty concerns in human form, for each scientist to personally confront. Similarly, 'LEM' as a space, will manifest itself within the spaces of hosts as a way of examining the inner workings of particular systems and worlds.

Is it a commentary on commerce and art?

It’s not a commentary but rather a system in which I invite viewers to become participants by making a selection of books.

I like how it often discusses immediate and localized politic issues without having to seem like it’s trying to force it down your throat.

How do you select the books?

The books in the shop come from a long reading list that I am currently using as reference material for a novel that I am writing.

What projects are you working on now?

I am preparing for three different projects. The first is a solo exhibition entitled 'Interview(s)' at Wilkinson Gallery that will open on November 22. It’s a massive sculptural installation involving a collaboration with Anthony Marcellini, an American artist based in Gothenburg, Sweden.

The second is a commission for the Asia Pacific Triennale 7, which opens 3 December at the Queensland Art Gallery in Brisbane. I will be creating a 20 channel sound installation performed by Janice Koh that uses the Australian Center of Asia Pacific Art as a starting point for the work.

The third is Moderation(s), a year-long program that I have been asked to curate for Witte de With in Rotterdam and Spring Workshop in Hong Kong. This will surface as a series of residencies, conferences, exhibitions and performances that will happen between the two spaces in 2013 that attempts to imagine a link between the two spaces and cities.

What's the most indispensable item in your studio?

Where are you finding ideas for your work these days?

Mostly by talking to two or three people that I deeply trust.

I would say it's probably a tie between the Fundação Serralves in Porto , Portugal and the Dia: Beacon in Beacon in the US.

Do you have a museum- or gallery-going routine?

Yes. But unfortunately that routine does not occur in Singapore.

Why not?
I wish museums and galleries in Singapore can aspire to some higher intelligence.

Do you have a favorite post-gallery watering hole or restaurant?

What's the last show that you saw?

The inaugural exhibitions at Gillman Barracks in Singapore.

What did you think about them?

I like walking around, from building to building. It’s pretty magical. But I think the galleries need to pack a little more punch when it comes to hanging the shows. Everyone's hanging the work as if they're stuck in art fair purgatory!

What's the weirdest thing you ever saw happen in a museum or gallery?

Walking into a gallery and seeing my work in a show that I hadn't agreed to participating in. And walking out of the gallery with the work in hand without saying a word.