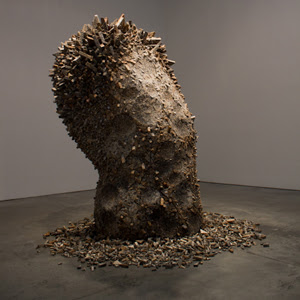 Korean artist Kwang Young Chun has been making large works called Aggregations since 1995. Most hang on the wall, some on the floor. All are covered by small triangular objects, pieces of Styrofoam wrapped in mulberry paper tied with a thin string.

Mulberty paper is particulalry significant in the Korean context, as it has been traditionally used to wrap every day items and was once found in every corner of a traditional Korean home, used to cover walls, doors and even window panes, or to dress up utensils and decorative objects. The artist closely associates it with his childhood in a small, quiet village. There he would watch his uncle, a doctor, hand his patients small bundles of medicinal herbs wrapped in mulberry paper inscribed with wishes for good health. 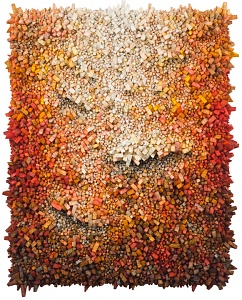 Wrapping and assembling are integral parts of Korean culture. Bojagi, or square wrapping cloths, date back to the early Choson Dynasty (which started in 1392) and were used for wrapping, carrying and storing objects. Koreans sometimes pile pebbles in temples for praying. 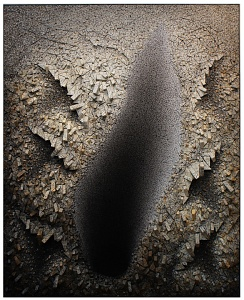 Chun started his career as an abstract painter in Philadelphia, espousing the lyrical style of the Color Field movement of painters like Mark Rothko, which had emerged in the 1950s after the Abstract Expressionism of Jackson Pollock and Willem de Kooning. His work was then characterized by large, flat, solid areas of color, on which he would layer variations of hue. But Chun's early American work did not achieve much recognition and in 1977 the artist returned to South Korea with his wife in search of new artistic inspiration.

In search of his roots, he spent time traveling throughout rural Korea, visiting folk museums and heritage centers. Understanding better where he came from, he started using mulberry paper.

In the early 2000s, most of the artist's works were monochromatic black-and-white or sepia and rust colors. But in recent years, Chun has injected more striking touches of color. 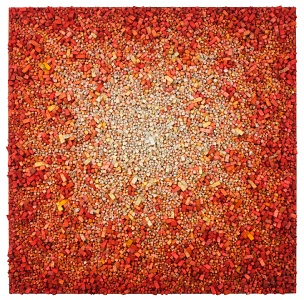 The colors are not applied onto the finished surface; instead, each triangle is separately dyed so that the color is imbedded into the depths of the painting. For these new works, Chun has been using only natural colors extracted from fruit (green persimmon), flowers (gardenia seeds) and leaves, as well as black tea, yellow earth and chestnut shells.
Asian Art Korean art