on August 21, 2012
Sotheby’s Asia will host its first selling exhibition of outdoor sculptures in Asia Oct 23 to Jan 31. The show will feature 16 monumental works by the award-winning international artist Zadok Ben-David in the beautiful setting of Singapore Botanic Gardens.

Sotheby’s, has been staging similar monumental sculpture exhibitions in the US, at Isleworth in Florida and at Chatsworth in the UK, and is now takeing a proven formula further afield. The exhibition is partly sponsored by Bank Sarasin, and will be free and open to the public.

Yemeni-born, raised in Israel and now London-based, Zadok Ben-David has a well established reputation in Asia. In 2007, he was the subject of a solo exhibition at Guangdong Art Museum in China and in 2008 he was commissioned to create a landmark sculpture for the Beijing Olympics. Ben-David’s celebrated Blackfield installation, featuring a forest of 20,000 tiny botanical sculptures, has been on a world touring exhibition since its creation in 2008. His work is already in Singapore, with a sculpture at the children's garden of the Botanic Gardens, as well as on the side of the Majestic Hotel. He also had an installation at the Singapore Biennale in 2008 (see below) 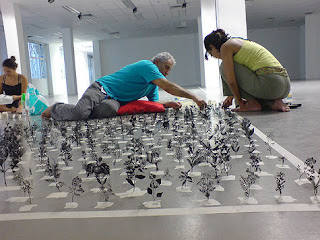 For the exhibition at Singapore Botanic Gardens this autumn, Ben-David has created 12 new works, drawn from themes from some of his most powerful sculpture series. Figures, trees and butterflies are entwined in works which challenge our perceptions of reality. Each is a unique creation made of Corten (or “weathering”) steel.
Singapore