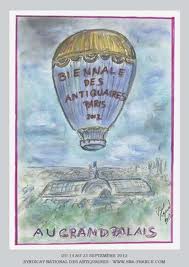 With Karl Lagerfeld as its scenographer, the Biennale des Antiquaires in Paris this September promises to be a stylish feast for the senses celebrating beauty.

From Roman coins and tribal art to Art Deco furniture and impressionist masterpieces, the Biennale des Antiquaires in Paris is one of the world’s most prestigious fair that brings together a treasure trove of rare and precious objects d’art.
For this year’s edition, the 26th, the French Syndicat des Antiquaires has asked famed fashion designer Karl Lagerfeld to oversee the staging and decoration, as well as to create the visuals of this established antique fair, which takes place once again under the glass domes of the Grand Palais, a Parisian landmark built for the Universal Exhibition of 1900. 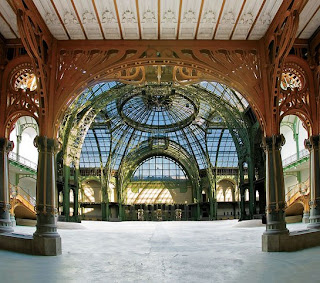 Inspired by the historic location with which he is very familiar, as he regularly holds the Chanel runway shows there, Lagerfeld is designing a temporary world that will serve as a backdrop to the thousands of objects d’art that will be presented next month.
“For this project, I was inspired by Paris, by the Grand Palais and by the universal exhibitions in the early 20th century but also by the covered shopping arcades built in the 19th century,” explains Lagerfeld.
“For me, the Grand Palais is the very heart of Paris, the idea of Paris and its universal side. It’s also a place I adore and where I have organized incredible fashion shows in the past,” he adds, pointing out that he wants to evoke the era of the Belle Epoque rather than recreate it.
Under the largest dome at the heart of the elegant structure, Lagerfeld is installing an antique-looking hot-air balloon, a reference to the first Air Show that was held at the Grand Palais in 1909 when many hot-air balloons, aeroplanes and airships were presented. The balloon, whose large basket will serve as a bar for visitors, has been chosen as the emblem for this biennale, and Largerfeld’s drawing is reproduced on all the fair’s materials. 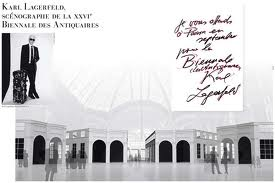 Lagerfeld is creating giant drawings of some key Parisian landmarks that will be displayed in the exhibition and he has also chosen to recreate the elegant arcades of the rue de Rivoli, complete with mock-up boutiques to house some of the exhibitor’s spaces. “I wanted to avoid a shopping mall (feeling), like we have nowadays,” Lagerfeld explains.
The Biennale des Antiquaires developed from the Foire des Antiquaires de France which had its modest debut in 1956 at the Palais des Expositions, a warehouse-like conference center on the edge of Paris. Andre Malraux, the famed French writer and then culture minister, moved the fair to the Grand Palais in 1962 creating the first International Biennale. The event immediately became a focal gathering of the best of the French and foreign antique dealers, decorators, jewelers and book store owners and the fair continued to be held there, except for the editions between 1994 and 2004 when it had to be moved to the Carrousel du Louvre while the Grand Palais’ glass dome was being renovated.
Over the years, the Biennale has regularly invited “creatives” such as French architects André Crivelli and Jean-Michel Wilmotte, Italian opera director Pier-Luigi Pizzi and fashion designer Christian Lacroix, to design the scenographie of the exhibition, and its lavish reception and gala dinners have attracted the cream of international society. “One year, I had at my table, Lagerfeld and John Galliano,” recalls Christian Deydier, the President of the Syndicat National des Antiquaires and a noted Chinese art dealer who has now organized four biennales.
"Karl Lagerfeld's creative genius, sensibility, finely honed taste and stage sense are all reasons why I am thrilled that he agreed to shape the 2012 Biennale according to his own taste. He is also a leading collector, someone who loves rare and beautiful objects, which means that he will approach this unique task as a connoisseur," Deydier says, adding, “we’re having a lot of fun, and Karl has new ideas every day.”
This year’s Biennale is featuring more dealers—150 compared with 86 in 2010—with an impressive 45 first-time participants, and is expected to attract about 90,000 visitors over the 10-day period the event runs. In addition to the main dome of the Grand Palais, this year’s Biennale is inaugurating the renovated "Le Salon d’Honneur," which had been closed since 1940.
The Biennale is a curated selection of exhibitors and objects which are carefully chosen by a vetting committee, explains Deydier. The selection process is an elaborated one, with the SNA president and board of directors appointing an organizing committee that votes on the antiquaires. Once dealers are invited to take part, a vetting committee of more than 150 consultants authenticates the works the dealers wish to present for the fair and these consultants weigh the works’ aesthetic merits to be sure they make the grade.
This year’s Biennale will showcase an impressive variety of works spanning a thousand years and six continents. Visitors will find European furniture and objects d’art from the 13th century to the 1950s; paintings from the late Middle Ages to the post-Impressionists; Greek and Roman antiquities; Asian art; porcelain; carpets and tapestries; weaponry; coins; jewellery; rare books and manuscripts.
Amongst some of the highlights to look forward to: Galerie d’Art Saint‐Honoré will present Winter landscape with a bird trap and Visit to the farm, two rare oils on wood by Pieter Brueghel the younger (1564 –1637/1638 Antwerp), Chadelaud will exhibit a 1904 mahogany and kingwood cabinet by Francois Linke which was first presented at the 1904 Saint Louis World Fair (Missouri and the 1905 Paris Salon du Mobilier) and the Gallerie Emmanuel will present an imposing sterling silver and Meissen porcelain centrepiece.
In previous instalments, major museums like the Metropolitan Museum, the Getty, the Art Institute of Chicago and the New York Public Library have purchased pieces at the Biennale, which Deydier says is the most expensive in the world to stage. “The quality of the works is extremely high and so are the insurance premiums,” he quips.
As in past years, haute jouillerie will be represented with the who’s who of jewelers rivaling to present the most eye-catching pieces. “This year, for the first time, they are all designing something just for the Biennale,” Deydier says.
While there will be a few exhibitors offering Chinese antiques, Deydier acknowledged Asia has never been the focus of the fair. “There is no way we could rival with what is available in Hong Kong,” he points out, explaining that the fair instead hopes to attract visitors from Asia who wish to broaden their knowledge and discover other art specialties. Nevertheless, Biennale organizers are now looking to offer a similar mini-biennale in Hong Kong to tap into Asia’s new wealth and interest in antiques. The Chinese city has been chosen along with Istanbul, Moscow and New York for mini-fairs in those years when the French fair does not take place.
The 26th Biennale des Antiquaires will run Friday 14 September to Sunday 23 September 2012.
Chinese art Luxury Published stories