on July 31, 2012
ArtisTree will present a solo exhibition of the work of artist and architect William Lim in "Space Journey: William Lim, A Decade of Installations" August 15-Sep 2 at ArtisTree, a 20,000-squarefoot multipurposevenue located at Island East in Hong Kong.
Five installations, six projections and one painting will be showcased, including some of Lim’s most celebrated pieces.

"Lantern Wonderland," a monumental installation that was on view at Victoria Park to mark the 2011 Hong Kong Mid-Autumn Festival, will be among the projection works on display. The work was recognized by the Guinness Book of World Records as the world’s largest sculpture made from lanterns. The fish-shaped construction was created by Mr. Lim using a traditional bamboo scaffolding technique and was made from 2,360 traditional Chinese lanterns, taking 35 people 13 days to build 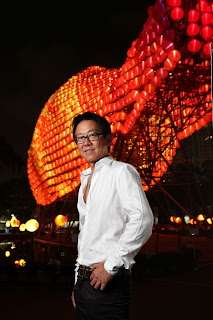