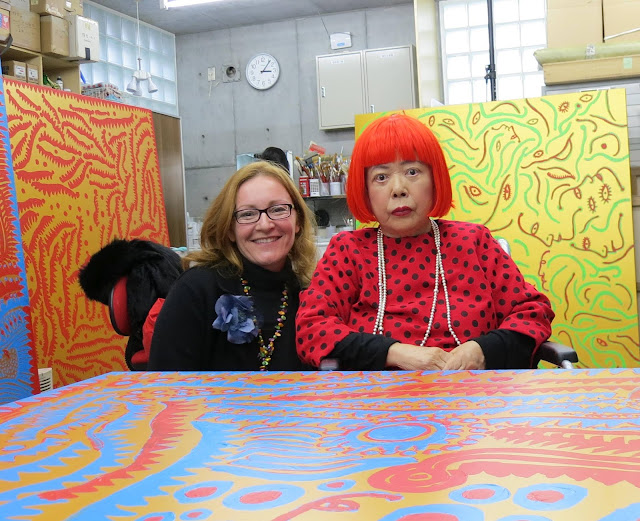 A feature about one of the greatest Japanese artists of our time.

At 84, Yayoi Kusama is showing no signs of slowing down. Though now mainly wheelchair bound, the grand dame of Japanese contemporary art is still at work every day in her three-story studio in a quiet back lane in Shinjuku, Tokyo just a stone’s throw from the Seiwa Hospital for the Mentally Ill where she committed herself to live permanently more than 35 years ago. 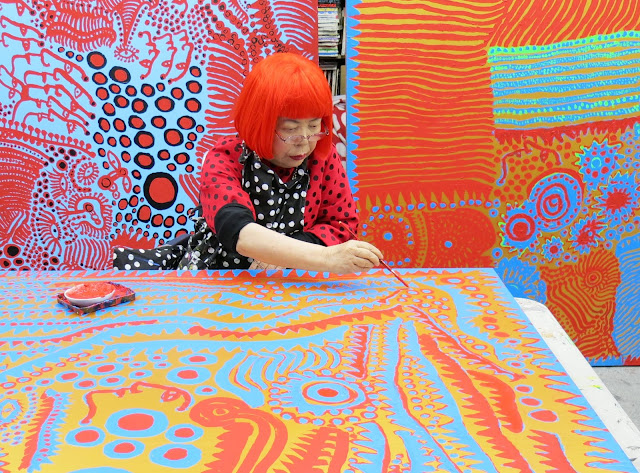 Since she represented Japan at the Venice Biennale in 1993, the avant-garde artist has enjoyed a second wind and interest in her works is currently as high as ever, reaching giddy heights at auctions – one of her paintings sold for $5.1 million in 2008 at Christie’s, a record sum for a living female artist. A major touring retrospective that went from the Museo Reina Sofía in Madrid to the Centre Pompidou in Paris and the Tate Modern Museum in London, will now open this month at the Whitney Museum in New York. Sotheby’s just opened a new gallery space in Hong Kong with an exhibition of 30 of her works, Yayoi Kusama – Hong Kong Blooms in My Mind, and in Japan, an exhibition Eternity of Eternal Eternity is touring several museums showcasing her most recent works, nearly 100 paintings. 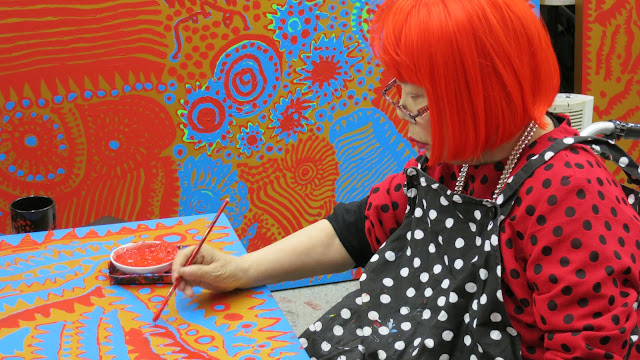 In her younger days Kusama could be seen perched on a step ladder painting enormous canvases, but nowadays she lays her canvases on a low table and is wheeled around them by one of her attentive staff as she attacks them from all sides. She relies on someone else to hold the paint she uses as well as sometimes support her arm, but her paintbrush never hesitates as she methodically works around her canvas using dots and repetitive motifs that have been her trademarks since the late 1950s.


Kusama’s art is also about to become even more present in the streets thanks to a comprehensive collaboration with Louis Vuitton, which sees her covering the luxury brand’s designer goodies with her Infinity Nets and polka dots.

“It is a continuation of something I began when I arrived here, namely the idea of art and artistic collaborations,” explained Marc Jacobs, Creative Director at Louis Vuitton, “it is wonderful how contemporary art permeates and changes the environment. For many people who do not look at art, or go to galleries, or maybe are simply not aware of Yayoi Kusama’s work, there will now be a new venue to see it and to come to appreciate it through the eyes of Louis Vuitton.”


“I am a big fan of Yayoi Kusama’s work,” Jacobs added, “When I look at her career and her different vehicles for expressing herself – from her early performances staged at MOMA, to her sculptures, paintings, canvases, nets and her endless polka dots – I find a sort of simplicity, naivety and passion. The fact that she never veers from her vision is really admirable. As with any great artist, she creates her world, she shares it with us, and we respond to it.” 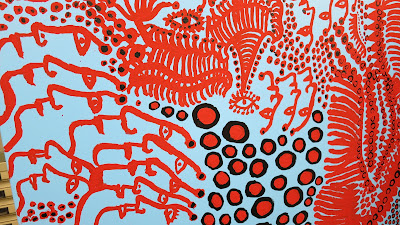 Born in Matsumoto in rural Japan in 1929 to a family of wealthy seed merchants, Kusama went to the United States in the 1950s and quickly found herself at the epicentre of the New York art world, where she came into contact with artists such as Donald Judd, Andy Warhol and Claes Oldenburg.


Harnessing the visual hallucinations she had suffered with since childhood – where she feels she “self-obliterates” in her environment – Kusama has created works that endlessly repeated dense patterns of nets and polka dots, her defining signatures.


The first years were psychologically traumatic as she recalls cold winters in her unheated apartment were a “living hell.” But success also came quickly with her Infinity Net pictures, where she filled huge canvases, sometimes more than 30ft-long, with endlessly repeated white loops of paint which she felt helped her protect herself from the “void” she feared. 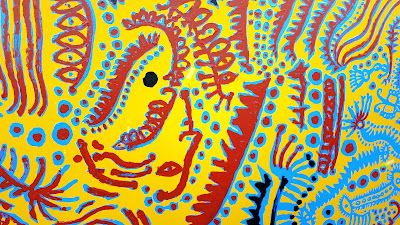 
Having made her name as a painter, she turned to textile sculpture and installations with her Accumulations Series. Her 1963 “Aggregation: One Thousand Boats Show” at the Gertrude Stein Gallery created a stir as it featured a rowing boat filled with flaccid phallic representations installed in a room papered with 999 black-and-white photographic reproductions of the work.


“I made a lot of phallic sculptures because I just hated sex,” she explained recalling the infidelities of her father. “I was with a boy for 10 years, but he also hated sex so that’s why we got on together,” she added, referring to sculptor Joseph Cornell.


In the late 1960s, her Happening performances brought her further notoriety as she brought together naked dancing hippies covered in polka dots and organized a series of demonstrations around town, including in front of the New York Stock Exchange. She produced manifestos for these events and invited then President Richard Nixon to paint her naked body for world peace (he didn’t reply). Her new notoriety affected her standing as a serious artist her commercial dimmed. She left New York to return permanently to Tokyo in 1973 and drifted into semi-obscurity until she became the first woman to officially represent Japan at the Venice Biennale twenty years later.


Kusama's work cannot be separated from the mental health problems she has experienced all her life; she utilizes her hallucinations to feed her art which in turn helps her cope with her fears and obsessions. “Ideas pop up in my head. Sometimes I see something in a dream and then I write down and sketch everything that I’ve just seen,” she explained. 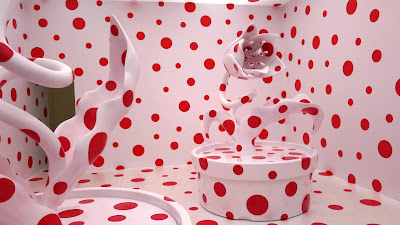 But while many may only associate her works with big giant red dots (her favourite colour), the aging artist continues to innovate while still tackling repetitive patterns.

Her two most recent series, showcased in the “Eternity of Eternal Eternity” exhibition, are Love Forever and My Eternal Soul, in which the artist depicts an endless stream of linked images that brim with the free-spirited imagination of a child, while revealing Kusama’s inner world.

Love Forever is a series of more than 50 drawings in black marker pen that she began seven or eight years ago. The chain of images includes polka dots, eyes, her profile, flowers. The second series of acrylic works, My Eternal Spirit, started two years ago, appears like a continuation of the themes and motifs explored in Love Forever, but this time all in bright colours. While in her studio, Kusama showed she’s still working on this last series, though she has also started to use silver and gold paints for the first time.

“I’m very surprised that my artwork has met with so much success,” she mused.