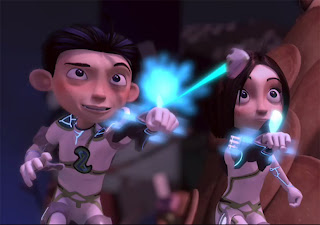 The‘Made in Singapore’ movie label is still a relatively new one, but the film and animation industry is starting to get some traction.


Twins Zane and Zoey are the Dream Defenders– the last line of defence between the real world and the nightmare creatures of the Dreamworlds. The young heroes, with help from their supercomputer Zeus, are the only ones who can stop the evil Icela taking control of children’s dreams and unleashing nightmares. The 3D animated series that debuted on American Pay TV last September has plenty of cool gadgets and enough scary villains to keep its young audience hooked for a while. There are now plan for a series of ebooks for next year, along with global licensing and a merchandising rollout.


But Dream Defenders was not created in a studio in Burbank, California. It was conceptualized and fully developed and produced by Tiny Island Productions, a Singapore company, which has recently also been commissioned by Cartoon Network to work on a 3D version of the television movie Ben 10: Destroy All Aliens.
The‘Made in Singapore’ movie label is still a relatively new one, but the film and animation industry is starting to get some traction. According to a study commissioned by the Media Development Authority and conducted by the Asia Competitiveness Institute LKY-NUS, Singapore’s Film and Video sector (which also comprises animation) contributed S$660 million in revenue in 2010 and employed over 4,400 workers, up 19.5% on the previous year. The value added contribution of the sector to the economy was estimated at S$210 million. 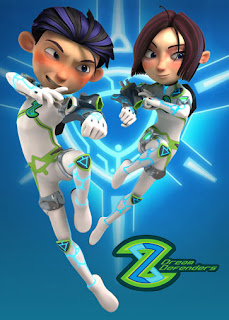 Singapore’s films have made some modest inroads at international festivals – Boo Junfeng’s Sandcastle contended for the Camera d’Or award at the 63rd Cannes Film Festival, while Eric Khoo’s Tatsumi was in competition in the Un Certain Regard category at the 64th Cannes Film Festival last year.
Yet, local productions have found it hard to travel internationally from a commercial point of view, admits Daniel Yun, the founder and CEO of Homerun Asia, a Singapore-based movie company engaged in the development, production and distribution of commercial films. Yun headed film production company Mediacorp Raintree Pictures for 11 years before setting out on his own in 2010.  Describing more recent changes in the local film industry, Yun pointed out “in the early days, Raintree charged ahead and created a semblance of a structure of an industry. There were hits and misses. Other film companies also played a big role, like Zhao Wei headed by Eric Khoo, which has probably been the most successful one; always careful with their budget but very creative. But we have already had some film companies that have come and gone. I think we’re at a transitional period now, I think it’s going to be swim or sink over the next five years.” 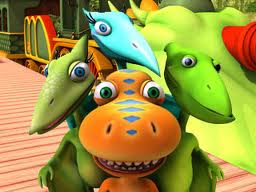 Animation companies have fared better commercially internationally. Local production company Sparky Animation has co-produced Dinosaur Train with US-based The Jim Henson Company, which sold to over 20 territories worldwide, and worked on Mr Moon with Skaramoosh (UK) and Title Entertainment (Canada), which sold to over 10 territories including Disney UK. Another Singaporean animation company Scrawl Studios has co-produced with Australia’s SLR Productions, the preschool animated series Guess How Much I Love You – The Adventures of Little Nutbrown Hare, which was picked up by Disney Junior for broadcast in the USA. 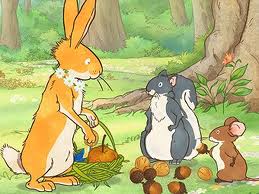 Still quite young, the local animation industry was spurred on by the arrival of Lucasfilm, which opened a digital studio in Singapore in 2005 and acted like a queen bee, bringing more players to Singapore, such as the Seattle-based DigiPen Institute of Technology, a leading computer animation and programming school. Today, there are more than 40 animation and special effects companies in Singapore, up from less than 10 in 2003. 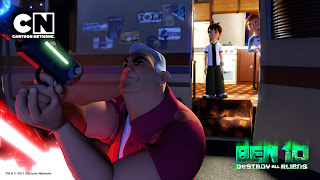 Whether film or animation, local productions are still relying heavily on co-financing and/or grants from the Media Development Authority. According to a recent written reply to parliament by Media, Information, Communications and the Arts Minister Yaacob Ibrahim, MDA has co-invested a total of S$109 million with the local industry since 2003 to undertake a total of 253 projects in film and television. This generated an additional S$320 million of non-MDA funding, of which 67 percent came from overseas.

Financing has been the main difficulty for the animation industry’s development. “Investors are still new to IP investment in Asia,” explained David Kwok, CEO of Tiny Island Productions Kwok, pointing out that many investors find it hard to understand how a cartoon will make money. “Investors here often compare the possible returns to that of the property market, and they tend to have a five-year exit strategy, which is too short for our industry,” he said.
Young filmmakers also find it hard to find private financing for their so-important first film, which can make or break a career, notes Singaporean film director Eric Khoo.
Last September, the MDA streamlined its funding schemes for the media industry from 46 to just five. The MDA Grant Schemes now has just two schemes to support content creation: Development Assistance, which provides targeted support of up to S$150,000 for story research as well as the refinement and development of scripts; and Production Assistance, which offers up to 40 percent of the qualifying Singapore Spend (dollars spent in Singapore), with another 10 percent available for the next media project undertaken by the producer. A third scheme, Marketing Assistance, helps promote the consumption of Singapore content with grant of up to S$25,000, while the remaining two schemes, Talent Assistance and Enterprise Assistance, aim to create a conducive business environment for the media industry.
“The broad shift in the funding model from co-investing to grant-dispensing was driven by economic logic,” explained Kenneth Tan, Assistant Chief Executive Officer (Industry) at MDA.
“Moving forward, the way to sustain growth in the media sector is through increased productivity. For productivity to go up, the focus should be on helping our media companies improve their quality of stories and up-skilling talent across a wide range of skills. Under the Grant Schemes, the intellectual property rights to the content will now rest with the companies, giving them an opportunity to exploit and maximize their IP,” he said.  A total of S$88 million has been set aside for the five schemes.
Industry players have generally welcomed the move away from co-financing, which often came with many strings attached, toward pure grants.
Jyotirmoy Saha, CEO of August Media Holdings, a local integrated media company which bought Scottish children's content producer Red Kite Animations two years ago, said these new grant schemes are “a fantastic evolutionary step-up” from the previous co-financing schemes.
“It brings us more in line with countries where global producers usually make a beeline. I think it gives companies like ours the teeth to compete worldwide more effectively without having to part with too much,” he said, pointing out that countries like France and Canada, along with some other Asian countries are already operating massive incentives that have supported the content development in their own markets. For example, Malaysia has a Film Returns Incentive Scheme, whereby local film producers receive incentive payments based on ticket sales for each film, and the new Films in Malaysia Production Incentive, effective in 2013, that will cover up to 30% of TV programme and feature film budget against a minimum in-country spend. In Australia, the Australian Screen Production Incentive offers generous tax incentives that help offset production, location and post, digital and visual effects production costs.
Kwok believes the new MDA grant structure has the potential to propel the local animation industry forward, making it more competitive and attract big international projects. “With the grant supporting up to 40 percent of the production costs, it will give local companies opportunities to pitch for bigger projects in the West, particularly on the servicing side, because the grant can help lower our cost which we can on-pass to the client. And at the same time, it helps the company to build its track record,” Kwok explained.
Since it launched its new grant scheme structures in September, the MDA has received 376 applications and fund 107 film and animation projects totalling over S$1.9 million in grants. Tan noted that so far more grants have been given out for Development Assistance (26 projects approved) over Production Assistance (2 projects approved). “One reason is because we don’t want our companies to rush into production but to spend more time developing the story. If Development Assistance is successful, there will be projects that may well not even need MDA assistance any more. These projects may be able to attract funding in their own right eventually,” he said.
To obtain one of the five grants, companies will have to meet a clear set of criteria, with checks and balances in place to ensure the grant system is not abuse. For example, in the case of the Development Assistance for a script development, payment will only be made once the script it completed. “The MDA would be making a creative assessment of the script. But we will want to see it has been done to the original specification the funding was requested,” Tan explained. For Production Assistance, there will be production milestones and payments will be made according to what actually happens and not what is projected, he added.
Such checks and balances might not have always been as strong as they need to be. The MDA is currently taking action against two Singapore subsidiaries of RGM Entertainment, the Australian talent management and executive production firm, for S$27.5 million over undelivered projects and an unpaid loan. The tie-up with RGM, whose parent is the Australian Stock Exchange-listed One North Entertainment, was part of the MDA’s efforts to partner third-party companies to support the production of local film projects.
The MDA has also not always disbursed what it pledged. Over the past four years from 2008 – 2012, MDA has pledged a total of S$28.5 million to support the production of a slate of projects in Singapore with My China Channel, Salon Media, Infinite Frameworks and HydePark ImageNation, but only $2.2 million have actually been committed for 11 projects.
A version of this story first appeared in Accounting & Business July edition