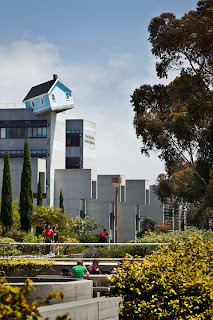 When Do Ho Suh first proposed “Fallen Star” to UC San Diego’s Stuart Collection, he “never thought it would be realized.” A cottage built from scratch and permanently joined to an existing campus building – several stories up in the air?

But there it is: seven years after the initial sketch, the artwork is ready for visitors. It opens to the public on June 7, with a meet-the-artist event from 1 to 5 p.m. 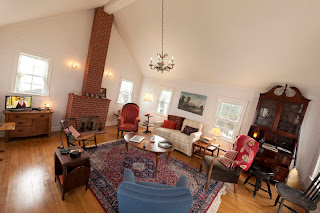 When the Korean-born artist first came to the United States, to study at the Rhode Island School of Design in 1991, he recalls feeling “as if he was dropped from the sky.” He had to physically and mentally readjust. Since then he's been exploring this feeling of uprooting and the notion of "home.". 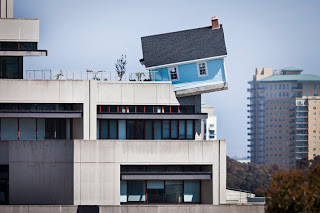 To some, imagining Oz, FAllen Star might look like a tornado-tossed interloper from Kansas. To others, more biologically minded, perhaps like a small blue creature living in symbiosis with its much larger host. Either way, it can be seen from multiple vantage points on campus and off.

Inside, people report awe – and vertigo. Except for the chandelier hanging straight from the ceiling (thanks to gravity), there isn’t a single plumb line to the house. The floor of the artwork sits at a 5-degree angle from the flat roof of Jacobs Hall, while the house itself is built at a different 10-degree angle. “Fallen Star” conforms to California earthquake building codes and was built to withstand 100 mph winds. Its foundation is 18 inches thick, compared to the usual 4 inches. But people are perceptually tricked into feeling like they’re falling. Some feel seasick or wobbly. It’s disorienting.

Yet it’s also familiar and cozy. Measuring 15 by 18 feet, the house is a three-quarter-sized version of a small house in Providence, Rhode Island. The found furniture is a bit worn and could have been grandma’s. There are family photos. Books. Touristy knickknacks. And the sorts of things you might see in a lived-in house: Keys on the coffee table. A cell phone. A remote.
Asian Art Korean art