The sale was “Voyages of Discovery,” a unique single owner collection featuring 15 major works by
Chu Teh-Chun and Zao Wou-Ki alongside 12 exceptionally rare Imperial Chinese objects. Highlights
of the sale included an oil painting by Chu Teh-Chun, Le Odeur du Ciel No.1, 1982, which was sold
$1.2 million , and a cloisonné enamel incense burner from the Qianlong period, Qing Dynasty, one of just two known in the world, which was sold to a phone bidder for $1.66 million. 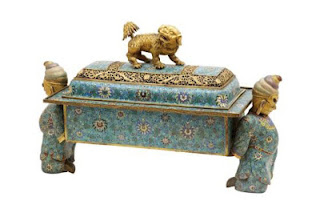 The paintings and works by Zao Wou-Ki and Chu Teh-Chun sold $8.17 million . They showcased a cross-section of the artists’ development through the decades, and illustrate the evolution of their unique styles from the 1960s through to 2006. Born in China and based in Paris for the past five decades, both artists present an important bridge between the traditional calligraphy and painting aesthetics of China and Western oil painting techniques . Important works from both artists smashed
their high estimates, including Zao Wou-Ki’s La Mer, 2004, which sold for over $1
million, Chu The-Chun’s Verte Nature, 2005-6, which sold for $927,416 and Chu The-Chun’s
Formes Illuminees, 2006, which sold for $682,680.