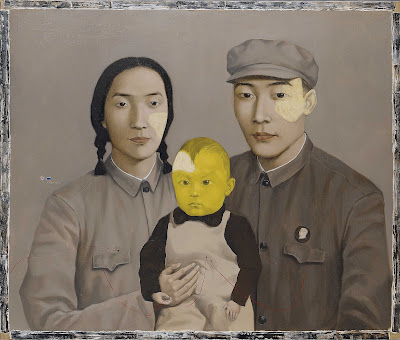 Bloodline – Big Family: Family No. 2 , the earliest work from Zhang Xiaogang’s Bloodline series ever offered at auction will headline Sotheby’s HK sale of Asian contemporary art on April 2. Other highlights include two important early works of Cynical Realism, namely 1993 No. 4 by Fang Lijun, the first-ever piece that the artist exhibited abroad, and A Good Dog by Liu Wei, which are expected to stir intense bidding.


Zhang’s Bloodline - Big Family: Family No. 2 has never seen before in public before as the work was initially purchased in 1996 and has remained in a private collection in Europe.


Zhang travelled to Europe in 1992 and in the following year created Bloodline – Big Family: Family No. 2. As the first instances of his signature series and a precursor to subsequent works, the paintings wielded decisive influence on the artist’s ensuing development. Inspired by old portraits from the Cultural Revolution, Zhang created Bloodline - Big Family: Family Nos. 1 and 2 based on old portraits of his own family. The former, after its initial showing in 1993, was immediately acquired by the Tokushima Art Museum in Japan, while the latter had been kept in Europe until recently. In the latter, a composition portraying the standard single-child family, the artist based the toddler on his own second eldest brother. Despite visible traces of the artist’s earlier expressionist style, this painting tips its hat to surrealism. Characteristics such as gender-neutral human figures and subdued colours can all be traced to the artist’s subsequent output, indicating the significance of this early work. 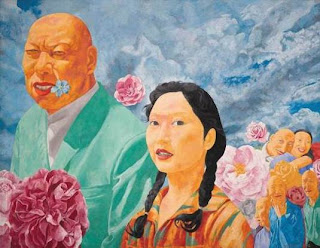 1993 No. 4 was Fang Lijun’s contribution to the 1993 Venice Biennale – the first time a Chinese artist made his mark in an international exhibition. This work is symbolic of Fang’s artistic career of the 1990s and important for the development of Cynical Realism. As early as 1988, Fang began to use the image of a cynical, roguish, humorous bald man as leitmotif, and in 1992 his work was featured on the cover of the New York Times Magazine, attesting to the West’s recognition of Fang as one of the most prominent Chinese artists of his time. 1993 No. 4 is a breakthrough masterpiece: the artist daringly employed gaudy colours, a marked aesthetic departure from earlier works dominated by softer hues. This painting depicts a man with a blue flower between his teeth and a woman with Chinese braids against a background of smirking people, accentuating the vulgarity of China’s rapidly evolving society. It is an embodiment of its time. This series wielded immense influence on the artist and his future development, as gaudy colours became his signature. 1993 No. 4 has been held in a private European collection since 1994. Its appearance for the first time in Asia is highly significant. 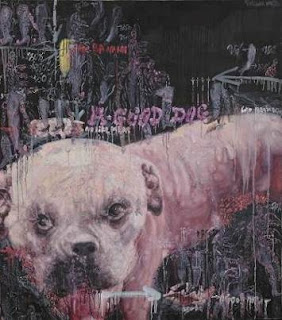 In 1995, Liu Wei’s Do You Like Pork? featuring the female body rose to prominence when it was exhibited at the 46th Venice Biennale. After Liu’s return to China, he abandoned social themes in favour of an exploration of pure pictorial interest. A Good Dog  was created during this important juncture. An important early work depicting this household canine, this painting is a fine example of his widely celebrated, highly charged and strongly expressive style.