Stunning cloisonne enamels to come up at Christie's HK in May 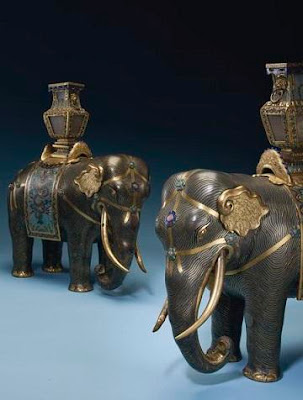 Christie’s HK will auction a spectacular array of masterpieces in cloisonné enamel from the Mandel Collection as part of its upcoming Spring Sale of Chinese Ceramics and Works of Art, on May 30.

Comprising 30 lots with a total estimate of over $5 million, the collection consists of beautiful cloisonné enamel works from the Qing dynasty (17th/18th century), and mostly from the Qianlong period (1736-1795).

Cloisonné is an ancient form of metalwork that involves inserting enamel paste made from tinted ground glass into a network of bent copper wire cells soldered onto a bronze or copper surface. When fired at low temperature, the enamel fuses to the body of the object, which is then applied with gold for added brilliance. Magnificent yet delicate, intricate and structured, these works of art exemplify the technical brilliance of craftsmen at the time, while revealing the aesthetic sensitivity and cultural symbolism of the period.

Leading the sale is a pair of magnificent cloisonné enamel caparisoned elephants from the Qing period (18th century). Admired for its strength, wisdom and longevity in Buddhist religion, the elephant figure was often found in the halls and throne rooms throughout the Imperial palaces. The pair in this sale is made in mirror image, each draped with a harness decorated with a dragon against a background of ruyi clouds, jagged rocks and raging waves, and each carrying a square vase on a gilt bronze saddle. In addition to their quality, these figures have a prestigious provenance which includes the Winston Churchill Estate, Greek shipping magnate Aristotle Onassis and the Estate of renowned opera singer Maria Callas. A pair of similar elephants is known to be at the Forbidden City, flanking the throne in the hall where the Emperor received his officials and the Empress Cixi summoned ministers to audiences during the reigns of Tongzhi and Guangxu. 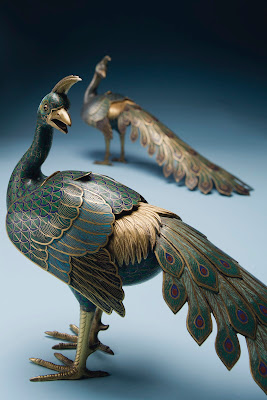 Another pair of exquisite animals is the very rare peacock censers from the Qianlong period (1736-1795). Peacocks were prized by Emperor Qianlong, who derived great pleasure in watching them in the gardens at court. The luminescent colours and intricate patterns of cloisonné is the perfect medium to replicate the bright colours and feathers of this bird, which is modelled perfectly in enamelled shades of turquoise blue and red here. Likely used for ceremonial purposes, this pair is all the more valuable because incense burners in the form of peacocks are extremely rare and seldom come to auction 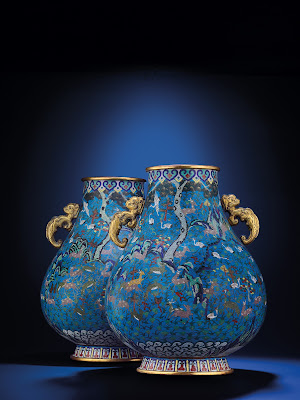 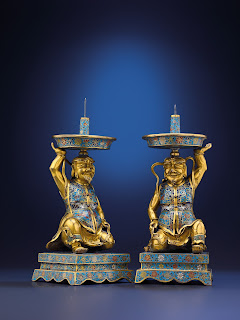 Continuing on the theme of auspicious creatures is a large pair of “Hundred Deer” vases, zun, of the Qianlong period (1736-1795). The motif of the “hundred deer” dates back to the middle Ming period (late 16th to early 17th century), and the idea of the deer and their young being protected from hunters by Imperial decree was a theme appreciated by Emperor Qianlong. On the current pair of vases, the deer, symbolising career advancement and long life, are joined by cranes, symbolising longevity. 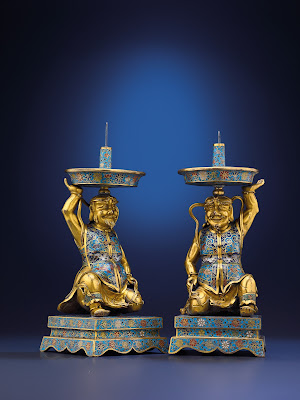 Apart from animal figures, the Chinese fascination with foreigners often led to stylised and whimsical depictions of the human figure of a foreigner in Chinese works of art. This feature can be seen in a very rare pair of foreigner pricket candle holders of the Qianlong period (1736-1795) in this collection. Two figures of foreigners dressed in elaborately decorated vests covering their rounded bellies are on bended knee, smiling and supporting a drip pan. The current pair had been exhibited in 2007 at the Metropolitan Museum of Art in New York. 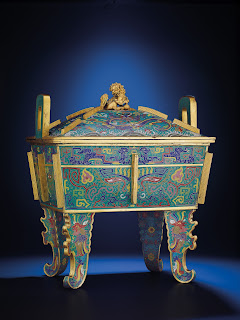