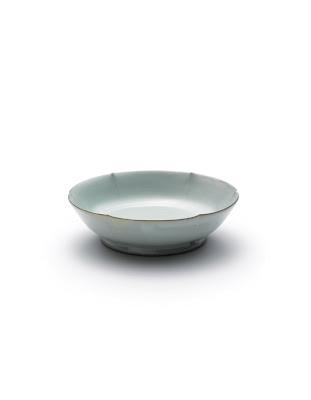 Hard to imagine that this simple white lobed washer carries an estimate of $7.7-$10.3 million! The rare piece comes from the Song dynasty's fabled Ru kilns, a dream for connoisseurs, and will be the star lot of Sotheby’s Hong Kong's Fine Chinese Ceramics and Works of Art Spring Sale Series on April 4.

Ru official ware was always rare. its production having probably lasted only twenty years, and by the Ming dynasty (1368-1644) was deemed ‘unobtainable’. Today the worldwide patrimony of heirloom pieces of Ru official ware that can still be traced comprises only seventy-nine items. Virtually all of them are in museum collections. Only six vessels are remaining in private hands besides the present piece: three of them plain circular washers, and three shallow dishes of which one is reduced in size.

The present flower-shaped bowl is probably the most desirable piece of Ru official ware still in private hands. Among extant pieces of Ru ware, it is remarkable in three respects: first for its glaze, perhaps the most attractive colour, structure and texture available; second for its rare shape, with its six delicate, sharp points subtly accentuating the glaze colour; and third for its illustrious provenance, the collection of Mr and Mrs Alfred Clark being one of the most noteworthy ever assembled in the West. 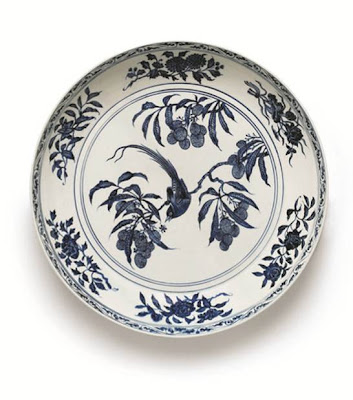 Other highlights of the sale include this majestic (nearly 60 cm wide) charger of the Yongle period, a unique example that is masterfully painted with a long-tailed bird swooping down from a branch
laden with lychees to catch an insect. Such freely executed brush paintings, with their careful shading of the cobalt blue, here used particularly for the bird’s plumage, and of course the sheer size of the vessel, reflect China’s blue - and- white porcelain production at its greatest moment 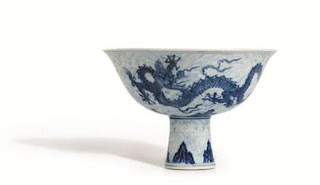 And this Xuande stem bowls with an exquisite dragon design, with deep blue animals emerging from watery blue waves. The motif of dragons among waves lends itself to this colouration, as the dragon – like water – is associated with the colour blue (qing in Chinese).