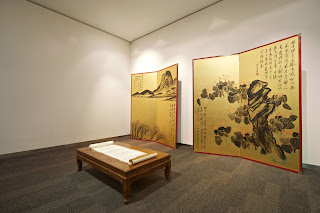 A rare pair of gold screens by Qi Baishi depicting Chinese landscape and flowers painted in ink and colour and dating from 1922, at the height of Qi’s popularity in Japan, will be the star lot of Sotheby’s HK April 3 sale of fine Chinese painting.

The gold screens were brought from Japan to China by Lieutenant General Mantaro Watanabe of the Imperial Japanese Army during his stay in the country where he commissioned Qi to paint on them. Upon completion, the screens were sent back to Japan and had never been shown in public since.  The two gold screens are dedicated to different artistic themes - Chinese landscape in one and flowers for the other. The Begonias screen is dominated by a depiction of a giant rock, and around it are begonia flowers to mark the contrast of weight and lightness as well as their complementary roles to each other.  The Willows At The Riverside screen focuses on a river and its two opposite shores. When place side by side, the two screens combine to form a unified composition, revealing the scope of Qi’s creative vision.

Qi left behind an impressive body of paintings in Japan, but they are rarely executed on folding screens. 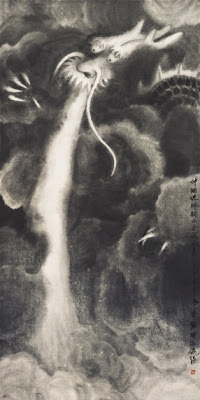 Another Qi Baishi painting on offer is Dragon in the Clouds from the Robert Chang Collection. The dragon here is rendered in black ink, which makes it a rarity among the artist’s other compositions.  This work was dedicated to Cao Kun, a warlord and President of Republic of China (1923-1924).