Published - Jewelry With an Environmental Motif

When Choo Yilin established her company, Choo Yilin Artisan Jewellery, here in 2009, she knew she wanted her business to be profitable, but also to have a positive social impact.

Ms. Choo, 30, is part of a wave of new-generation jewelry designers who are infusing their creations with an environmental message. “The whole idea is really to root jewelry design as a tool to tell powerful stories and start conversations,” she said by telephone recently from London, where she is pursuing a master’s degree in business administration at the London Business School.
Ms. Choo said she got the idea for her jewelry business after moving to Thailand in 2007, when her husband, a diplomat, was posted there. She started to volunteer in a nonprofit organization doing development aid work in the country. “It’s there that I learned about marginalized communities,” she said, “and one of them was the Karen hill tribe in northern Thailand.” 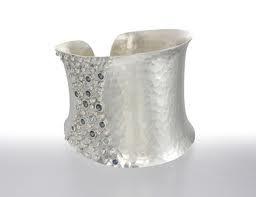 The Karen are the largest of an estimated 20 tribes living across the mountains of Northern Thailand and Myanmar, mostly in remote villages. They have very few material possessions yet maintain a tradition of wearing silver jewelry that they make by hand.
“The Karen people are renowned for working with 99.9 percent fine silver, which they hand-hammer,” Ms. Choo said. “But their pieces would be generally considered by the international markets as ethnic and tribal. It is very niche; you have to appreciate the aesthetic. The international markets usually tend to consider these jewelries as inferior to traditional high-fashion-label works, because of the ethnic aesthetics.”
She said she worked with them on creating “pieces that would remain in line with their ethnic aesthetic, but further embellish them with gemstones and silver pattern works that would appeal to an international market.” The pieces sell for 285 to 785 Singapore dollars, or $380 to $1,040.
Using the principle of capitalism and economic trade can be more effective in helping marginalized communities than just setting up a charity, Ms. Choo said. “It also helps preserve a cultural art form that could potentially die out because of falling demand,” she added.
Today, the company also works with artisan jewelers in Bangkok to produce a variety of collections through which Ms. Choo tries to tell a story of conservation, be it of the forest, coral or traditional cultures. She also has partnered with nonprofit groups like the WWF and SeaWeb to communicate their environmental messages through her designs. 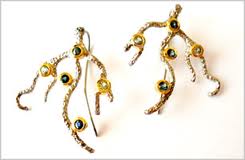 In 2010, she introduced the Alternative to Coral collection, inspired by SeaWeb’s “Too Precious to Wear” campaign, which aims to stop the trade of pink and red coral, whose harvesting destroys reefs’ environment and makes coastlines more vulnerable. “They asked jewelers around the world to sign a petition to ban the use of coral in jewelry design,” she said, “I was the first Asian to sign it.”
SeaWeb had also asked renowned designers like Paloma Picasso, Frank Gehry and Melissa Joy Manning to create the Coral Reinterpreted collection to support its campaign. Each designer created or donated a piece of wearable art that evoked the beauty of the ocean without harming coral or other marine life.
This concept inspired Ms. Choo to design a collection made entirely of reclaimed sterling silver and gemstones, with each piece designed to resemble the organic coral forms. “The idea was to say yes, coral is beautiful, but you don’t need to wear the real thing in order to appreciate it,” she said.
Her latest collections, showcased this month at the trade fair Tranoï in Paris, feature heavily sculptural and organic shapes made of bronze. These are woven with sterling silver and gold vermeil inspired by the forest and have motifs of vines, roots, trees and blossoms. Ms. Choo said she decided to do the collection after the United Nations declared 2011 as International Year of the Forests.
“For many urbanites deforestation is not really in our consciousness,” she said. “We always imagine that it’s something for hippies and hard-core environmentalists. So we created a collection entirely inspired by the forests; earrings with leaf-blades, rings with bark like texture.”
Supporting the WWF’s “Plant a Baby Tree” campaign, her company also pledged to plant a tree for every purchase, letting clients track their tree though Google Earth.
Ms. Choo concedes that she is under no illusion that her clients are buying her jewelry because they are tree lovers. “They buy the jewelry primarily because they like the design, and then comes the price-point, and finally the story that the jewelry tells maybe a mitigating factor,” she said.
It would be “delusional,” she said, to think that designers can sway consciousness to a large degree.
Still, she says, “fashion is extremely powerful, and it has always been responsible for a lot of human behavior as well as consumption patterns. And I always wonder why more fashion designers do not use the power that they have in fashion design to initiate some positive social impact.”