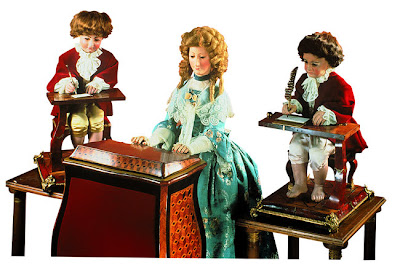 In 1768, the Swiss watchmaker Pierre Jaquet-Droz began to create The Writer, his first of several automatons. The early humanoid robot of carved wood, 70 centimeters, or 28-inches, tall and seated at a small mahogany table, could write on paper using a goose feather quill.

In the following years, working with the help of his son, Henri-Louis Jaquet-Droz, and his fellow clockmaker Jean-Frédéric Leschot, he also created The Musician, a mechanical young woman who could play five tunes on an organ, and The Draughtsman, a “child” able to draw four separate images including that of a dog and a portrait of a man.


The three automatons, first shown in the Jaquet-Droz atelier at La Chaux-de-Fonds, Switzerland, in 1774, were soon crisscrossing Europe, being presented at the most renowned royal courts. Viewers marveled at their ingenuity: The Writer could dip the quill into an inkpot, while his eyes and head followed the movement of his hand.


In 1906, the Neuchâtel Society of History and Archaeology in Switzerland acquired the three and bestowed them on the Neuchâtel Museum of Art and History. This year, the museum is collaborating with two other Swiss museums, the Musée International d’Horlogerie de La Chaux-de-Fonds and the Musée d’Horlogerie du Locle-Château des Monts, to present simultaneous exhibitions under the title Automates & Merveilles, celebrating the Jaquet-Drozes and Mr. Leschot, three masters of 18th-century clock making.


Each museum taking part in the exhibit, which runs April 28 to Sept. 30, will explore an aspect of the life and times of the Jaquet-Droz family using pieces from the museum’s permanent collection as well as additions from private collections. At Neuchâtel, the exhibition will focus on the men themselves, while at La Chaux-de-Fonds, the focus will be on music — their automated music boxes, musical automatons, mechanical musical instruments. Locle will highlight the miniaturization and precious decoration of these objets d’art.


The Musician will be on show at La Chaux-de-Fonds, while The Draughtsman will travel to Locle for the duration of the joint exhibitions.


The Jaquet-Droz automatons are the most famous examples of a genre with a long history, said François Junod, himself an independent Swiss maker of automatons. This is partly because “they’re still with us,” while earlier mechanical figures from ancient Greece, and others created by the 18th-century French inventor Jacques de Vaucanson, have disappeared, Mr. Junod wrote recently in an e-mail.


Mr. Junod counts The Writer as his favorite and also the most complicated of the three. Innovative for its time — almost like a forerunner of computers — it features a “programming” wheel which makes it possible to choose the words the figure writes, and a “memory” made up of a set of cams and connecting rods to transform rotary into linear motion. These control a letter-forming mechanism of more than 4,000 components, thanks to which the robot can write any text that does not exceed 40 letters or symbols on three lines.


With its right hand, The Writer dips a quill into an inkwell, shakes the pen, then writes the text on paper that shifts in position.


Mr. Junod says he appreciates the work involved even though it is, by modern standards, relatively rudimentary. In 2010, he completed, for a private collector in California, Alexandre Pouchkine, an android tribute to the Russian poet that can write 1,458 different poems.


Pierre Jaquet-Droz, born in 1821, was a successful clock maker in his time, producing numerous pieces with the help of his son and Mr. Leschot, whom he took in at a young age after the boy’s mother died.


Geoffroy Ader, the Geneva-based head of Sotheby’s European watch department, said by e-mail recently that Mr. Jaquet-Droz could best be described as a major “horloger-mécanicien,” or watchmaker-engineer, reflecting his “broad array of skills and great contribution to watchmaking.”


Mr. Ader said that Jaquet-Droz watches were rarely signed by the maker because of the corporate rules of the time in the Swiss High Jura.


“The watches were often exported and signed by the names of agents or merchants,” he said. “Nevertheless, pieces made by Jaquet-Droz can be identified by several characteristics. Some pieces are inscribed with Jaquet-Droz’s master mark, the movement is sometimes punched with a small three-leafed clover, and the decoration of cases and boxes can be seen as a signature.”


The boxes made to hold the watches were decorated by Geneva’s best enamelers and goldsmiths, he added.


In 1775, Jaquet-Droz’s son Henri-Louis moved to London, then a leading clockmaking center, and struck a deal with James Cox, a merchant who specialized in trade with China. From then on, the majority of the company’s production was destined for the Chinese market.


Many pieces were enameled pocket watches set with pearls and precious stones, Mr. Ader said, adding that Mr. Jaquet-Droz also produced snuffboxes with music and singing birds and musical flasks. The company only produced a few hundred pieces, Mr. Ader said, and many reside in museums.


While the unique Jaquet-Droz craftsmanship was appreciated by European connoisseurs, Mr. Ader said, “his timepieces and automata were also highly sought after by Chinese dignitaries.” Such interest remains in Asia even today.


In December, The Writer made its first appearance in China, presented by what is today Montres Jaquet Droz, a company owed since 2000 by the Swatch Group. The display was designed to promote the coming Swiss exhibitions.


In front of the watch connoisseurs in Beijing, The Writer penned the words “Jaquet Droz en Chine,” or Jaquet Droz in China.


The works of Mr. Jaquet-Droz rarely come up at auction, and remain “highly sought after by a new generation of collectors,” Mr. Ader said. A Jaquet-Droz & Leschot piece, a pair of gold and purple enamel singing bird boxes made for the Chinese market, sold at Sotheby’s in July for £735,650, or $1.2 million, nearly three times the low estimate