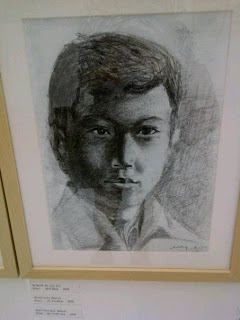 One of the fathers of the Cynical Realism movement in China is having a retrospective of sort of his work at the private Museum of Contemporary Arts in Singapore. Fan Lijun Documenta offers only one giant original painting, while the rest of the walls are covered with small reproductions of most of the works throughout his career, along with photographs and documentation that tried to put his artistic development in context.

The exhibition offers a fascinating inside into the career of this important artist and the evolution of his work, though unfortunatly the poignancy of many of his pieces, which are usually large canvases, is lost in the small format. 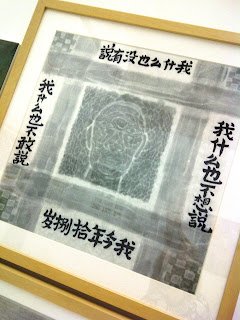 Fang Lijun is perhaps best known for his paintings of shaven-headed young men, looking bored, indifferent or disillusioned with the world around them, thereby depicting a post-1989 generation without ambitions and idealism, slightly lost in a ‘new’ China. A large part of the exhibition is devoted to these works from the late 1980s onwards 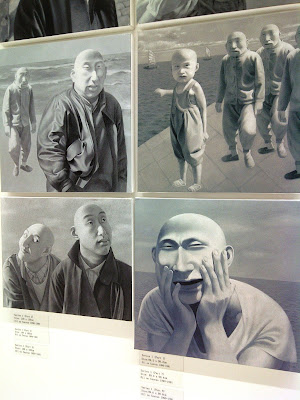 The artist has always tried to pursue his own artistic vision and to understand his work one must look into his past; his early struggles as a child of the Cultural Revolution and later his sadness at the violence of Tiananmen Square. .

Born in 1963 in Handan in northern Hebei Province, the Cultural Revolution has left an indelible mark on him. “It’s a very common story, I guess. From the moment I understood what was going on, it really influenced me and in some ways still does,” the artist recalled, saying he grew up being told his family wasn’t a “good” one. Fang still remembers how having joined a denunciation session and shouting “hang that old guy,” he discovered that the man being denounced was his own grandfather.

In an effort to keep Fang out of trouble his father bought him some art supplies and hired an art teacher, “not a very good one,” the artist said . Years later, Fang enrolled at the Central Academy of Fine Arts in Beijing, where he studied woodcutting and experimented with many different painting styles, including abstraction. “Everything went quite smoothly and the memories of the Cultural Revolution faded away,” he said . However, the events in and around Tiananmen Square, and the subsequent crackdown on students on June 4th 1989, changed his feelings of security once more.

“The school was very close to Tiananmen. I was there almost every day. On that night, I was there. What happened made me feel like the end of the world. It also made me realize how fragile life really is. Your whole existence can easily be thrown out.” The events not only affected him as a man, but also affected his work. “Prior to June 4, most of my works were experimental, but after, I could link the experience of the Cultural Revolution with the current one, and I realized humanity won’t be changed with time.” 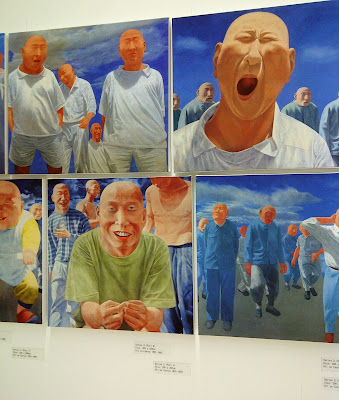 The bald young men started to appear in his work while he was still at school. “I was just experimenting with differing things. It was just one of many things I was trying out and I had no idea of what I was doing really, but after June 4 I knew that was the direction I really wanted to follow.”
In many ways, the disillusioned bald-headed men reflected Fang’s own sadness. They point to a quiet, internal rebellion, showing indifference to government policies.

In the early 1990s, his work was dominated by a dark colour palette of black, grey and deep blue. Many of his subjects appear adrift in an ocean, sometime gasping for air, seemingly fighting invisible forces to stay afloat. By the late 1990s, the mood lightened a little and bold colours started to reappear in his work. Also, Fang’s bald-headed subjects started to face away from the viewer, apparently lost in their thoughts, sometimes looking up at the heavens for inspiration. 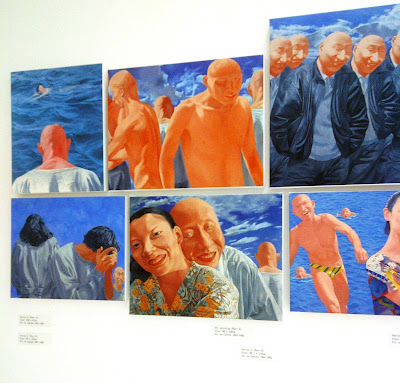 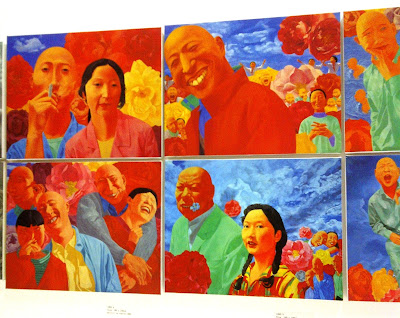 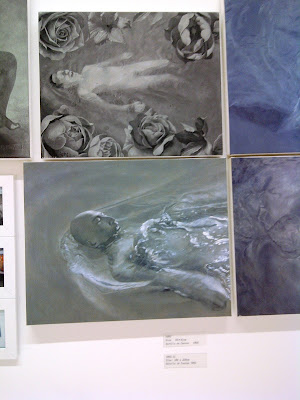 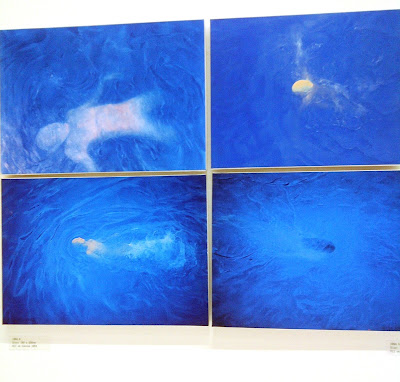 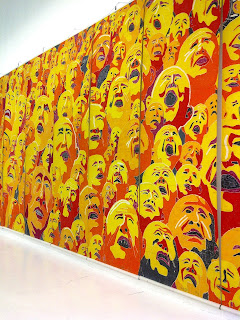 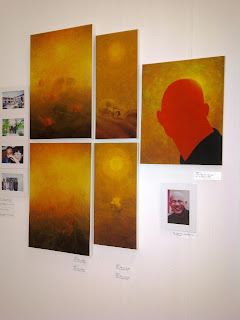 With the birth of his daughter in 2005, the artist appears to have found a new wind of inspiration. Babies, happily playing with flowers or flying in the sky on the back of flying swans, repeatedly appeared in his works which have a more playful mood overall.

The theme of birth and rebirth, is often treated in wide, heavenly panoramic paintings. But life for these babies is not all blissfully flying in the clouds, as the weather sometimes appears menacing, with storms brewing. 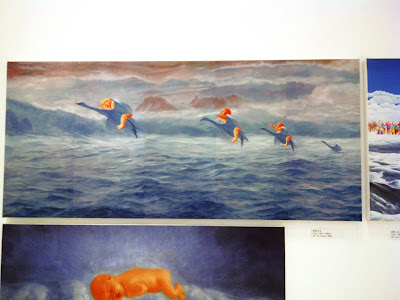 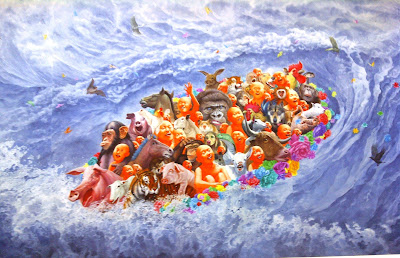 His latest works have Noah'Ark connotations... with lots of anumals and men thrown in a torment.